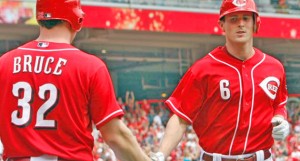 Cincinnati’s Drew Stubbs (6) gets a congratulation from Jay Bruce after his solo home run in the third inning. Stubbs’ efforts weren’t enough as the Reds lost 6-2 to the Pittsburgh Pirates on Sunday. (Courtesy of the Cincinnati Reds)

CINCINNATI — Dusty Baker admits that he and the Cincinnati Reds were starting to get a little greedy. Winning games at a historic pace can do that to a team.

The Reds’ five-game winning streak came to an end Sunday as A.J. Burnett remained undefeated against them this season to help the Pittsburgh Pirates salvage the finale of their three-game series with a 6-2 win.

The Reds had won 15 of their previous 16 games and 22 of 25, a run of success not enjoyed by the franchise since 1890, the team said citing research from the Elias Sports Bureau.

“You get greedy,” Baker admitted when asked if simply winning the series was enough. “When you start winning every day, two out of three isn’t good enough. We went 5-2 on the home stand, but you always want more.”

Burnett (14-3) allowed just one hit after the first inning and retired 18 straight batters before walking Jay Bruce and Ryan Ludwick with two outs in the ninth. He allowed three hits and two runs with three walks and seven strikeouts in 8 2-3 innings to improve to 3-0 in three starts against the Reds this season.

“He can command his pitches to left-handers,” Bruce said. “He knows what he wants to do, and he’s aggressive. He’s having a great year.”

Joel Hanrahan got the final out for his 32nd save.

The Reds are still 16-4 since All-Star first baseman Joey Votto left the lineup with a torn meniscus in his left knee that required surgery.

Bruce doubled in Drew Stubbs to give the Reds a 1-0 lead in the first, the fifth time in seven games on the home stand that the Reds scored in the first inning, but Pittsburgh took a 2-1 lead in the second on Neil Walker’s 12th homer of the season, a two-run shot that tied Walker’s season high.

After Stubbs tied the score with his 14th homer of the season, the Pirates went back ahead on Marte’s two-run triple that followed singles by Gaby Sanchez and Clint Barmes.

Homer Bailey (9-7) allowed nine hits and four runs with one walk and three strikeouts in 4 2-3 innings on Sunday.

“He couldn’t find his arm slot,” Baker said. “His balls were coming back over the plate. He got a slider up to Walker. He’s been tough on us. He’s been a thorn in our side the whole time. They hit the ball hard, but they found some holes, too. We’ll chalk this one up and go on the road.”

McCutchen led off the ninth against Logan Ondrusek by tying his single-season career high with his 23rd homer of the season and first since July 17.

The Reds and Pirates meet six more times, three in Cincinnati in mid-September and three in Pittsburgh the last weekend of September. Rookie infielder Todd Frazier is ready after enjoying the boisterous weekend series, which included sellout crowds on Friday and Saturday and a near-sellout on Sunday.

“It felt like a playoff atmosphere,” Frazier said. “We’ve got to keep coming up clutch. We won’t win all of them, but we’ll give our best effort. We can’t take anybody lightly, especially Milwaukee, with their hitting and pitching. Everybody in our division is pretty good. We’ve got to keep doing what we do.”

Baker hopes “doing what we do” includes not letting up now that the Pirates have left town.

“It was intense all the time, but we’ve got to beat everybody else, too,” he said. “We’ll worry about the Pirates when they come up on the schedule.”

NOTES: Reds 2B Brandon Phillips missed his fifth straight start with a strained left calf. … The Pirates finished 6-4 on their longest road trip of the season. They open their longest homestand Monday with a four games against Arizona, the first of 11 in 11 days in Pittsburgh. … The Reds open a seven-game road trip in Milwaukee on Monday. They’ve won nine consecutive road games, the longest active streak in the National League and the team’s longest since a 10-game run from July 27 through Aug. 13, 2005.