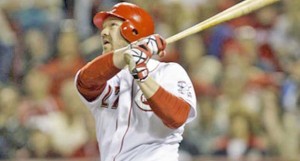 Cincinnati’s Scott Rolen drilled a two-run single in the first inning, then tripled and scored the winning run as the Reds beat Pittsburgh 5-4. (Courtesy of the Cincinnati Reds)

CINCINNATI (AP) — Scott Rolen had quite an eventful trip around the bases. The result was worth it.

Rolen hustled for a triple and rushed home on an infield out for the go-ahead run in the eighth inning as the Cincinnati Reds won their fifth straight game, 5-4 over the Pittsburgh Pirates on Saturday night.

Rolen began the eighth against Jared Hughes (2-1) with a line drive off the right-center field wall that barely eluding Pittsburgh All-Star center fielder Andrew McCutchen. Rolen, who’s in his 16th major league season, beat the relay with a headfirst slide into third base.

“I was just hoping he wouldn’t catch it. I haven’t had too much luck in that part of the field. I was running hard. It was probably a gamble with nobody out,” he said.

Rolen immediately took off for home when the next batter, Todd Frazier, bounced the ball high off the plate.

“I was thinking I was dead the whole way,” said Rolen, who earlier had a two-run single. “That’s a miserable 90 feet. You know you’re going to have to dive or crash into something. I saw it, I read it, and I felt like I would make it. If I hadn’t, we’d be doing this same interview, but for a different reason. It worked out.”

“I looked, but I realized I didn’t have a grip,” Hughes said. “I didn’t want to throw it over (catcher Michael McKenry’s) head, so I made sure to get the out.”

Manager Dusty Baker had no problem with Rolen’s decisions.

“He’s one of the best baserunners in the game,” Baker said. “He’s always alert, always trying to take that extra base.”

“This is a playoff atmosphere every day — close games every day,” Baker said.

Jonathan Broxton (1-0), acquired on Tuesday from Kansas City, pitched a scoreless eighth for the win. Aroldis Chapman worked the ninth for his 25th save.

Pittsburgh manager Clint Hurdle was ejected in the top of the second after both benches were warned following the second Pirates batter to be hit by a pitch in two nights.

“That was a topic of discussion,” Hurdle said. “There was no warning before the game. I just wanted the game to go on.”

Mike Leake plunked Josh Harrison with two outs, no one on base and the Reds leading 2-1. Harrison and Leake briefly exchange words, prompting plate umpire Brian Gorman to issue the warnings against further trouble. Hurdle came out to discuss the decision and was ejected — for the third time this season — when the talk grew more heated.

On Friday night, Chapman hit McCutchen with two outs in the ninth.

The Reds capitalized on an error to take a 2-0 lead in the first. Zack Cozart led off with a single, Drew Stubbs bunted up the third-base line for a hit and both runners advanced on third baseman Pedro Alvarez’s throwing error, setting up Rolen’s two-out, two-run single.

McKenry led off Pittsburgh’s second with his 11th homer of the season. The Pirates tied the game in the third on Alex Presley’s leadoff triple and Neil Walker’s sacrifice fly.

The Reds regained their two-run lead in the fourth on one-out singles by Stubbs and Jay Bruce, Ryan Ludwick’s RBI line-drive double off the wall down the left-field line and Frazier’s infield single.

Josh Harrison cut Cincinnati’ lead to 4-3 with his third homer of the season in the fourth.

Pittsburgh got its own break to tie it in the sixth. Garrett Jones moved from second to third on Leake’s wild pitch while striking out Alvarez, and Travis Snider hit a sacrifice fly.

NOTES: RHP Kevin Correia will start for the Pirates on Aug. 8 against Arizona in Pittsburgh, the team’s concession to playing 20 games in 20 days, Hurdle said. Correia made his first relief appearance of the season on July 29 after 19 starts. … Reds 2B Brandon Phillips was a late scratch from the starting lineup. Phillips has missed four starts with a strained left calf. Phillips probably won’t play in Sunday’s series finale, Baker said.

Browns’ new owner must convert to being a fan