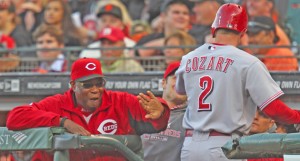 Bronson Arroyo (7-7) gave up 10 hits, five walks and five runs in 5 1-3 innings, as the Reds lost for the second straight day after winning 15 of 16. Their last two-game losing “streak” came before the All-Star Break: July 3-4 at the Los Angeles Dodgers.

“(Norichika) Aoki made a game-saving catch in right, and we got beat,” Arroyo said.

But not before the Brewers’ struggling bullpen made it interesting, again.

The Reds, down 5-1, scored twice in the eighth. Francisco Rodriguez relieved Gallardo in the inning and gave up a single, double and walk to load the bases with one out before being lifted to a smattering of boos from the announced crowd of 31,319. John Axford then gave up an RBI single to pinch-hitter Xavier Paul and a sacrifice fly to Dioner Navarro — a ball that would have been a double if not for a great sliding catch in the gap by Aoki.

“I hit it good,” Navarro said. “I thought for sure it was going to be in the gap. He made a spectacular play — unfortunately for us. Who knows what would have happened if he hadn’t made a diving catch.”

Gallardo (10-8) gave up six hits, three walks and one run to equal his longest outing of the season and reach a double-digit win total for the fourth straight year.

Aramis Ramirez, Corey Hart and Maldonado homered for the Brewers as part of a four-run sixth inning. Maldonado added an RBI double in the eighth.

Axford stayed in to pitch a perfect ninth for his 18th save in 25 chances.

Arroyo had won his last three starts and was 2-0 with a 2.66 ERA against the Brewers this season, 13-8 for his career. On June 26, he took a no-hitter into the eighth inning but came away with a no decision in a 4-3 Reds victory, retiring 20 straight batters at one point.

“I’m always comfortable in this park,” he said. “I knew keeping the ball down was going to be at a premium today.”

And he did, until the fifth, when Maldonado led off with a double off the wall in right center and scored two batters later on Gallardo’s RBI single.

Arroyo didn’t last through the sixth.

With one out, Ramirez made it 2-0 with a shot into the Brewers’ bullpen in left field for his 14th home run of the year. Hart followed two pitches later with his 21st homer, a 444-foot blast to the Harley-Davidson seating deck high above the bullpen. Then, after Rickie Weeks singled, Maldonado sent a towering fly ball just over the left-field wall and the glove of a leaping Ryan Ludwick. It was Maldonado’s first home run since June 20, a span of 33 games and 108 at-bats.

“We couldn’t get Maldonado out,” Reds Manager Dusty Baker said. “We all thought the home run was a pop-up.”

Instead, it was a game-clincher.

“Hanging slider,” Maldonado said. “We were able to put something good together and get some runs, especially against Arroyo. He’s a pretty good pitcher.”

Gallardo is 63-42 in his career but has struggled against the Reds. Entering play, he was 4-5 with a 5.06 ERA in 14 starts against Cincinnati, including a 1-2 mark this season. He was a different pitcher Monday, however, allowing just one runner past second base before Zack Cozart smacked a one-out home run in the seventh.

“They have got pretty good hitters on that side, and I have faced them quite a bit,” Gallardo said. “It’s no secret. They know what I throw and what I like to throw. It’s just a matter of keeping the ball down and moving around.”

Gallardo’s teammates helped him out on defense, too. Aoki robbed Jay Bruce of extra bases in the second, when he leaped against the wall in right to snag a fly ball. And in the fifth, Hart made a diving, full-extension catch in foul territory on Arroyo’s sacrifice bunt attempt after Ryan Hanigan walked to lead off the inning.

“Aoki was in the right spot all night,” Baker said.

Milwaukee had just gotten swept in three games at St. Louis, where the Brewers were outscored 18-4, dropping the club back to a season-worst 11 games under .500.

“Real nice,” manager Ron Roenicke said of the win. “As hot as these guys have been, real nice.

“That was good offense. That was a lot of good at-bats. I know Arroyo gives us problems. He’s tricky, knows how to pitch, and we did a nice job with him.”

NOTES: Before the game, the Brewers recalled shortstop prospect Jean Segura from Double-A Huntsville and inserted him into the starting lineup, batting eighth. Segura, 22, was the top player acquired from the Los Angeles Angels in their deal for Milwaukee right-hander Zack Greinke in July. He took the 25-man roster spot held by shortstop Cesar Izturis, who has been claimed by the Washington Nationals off waivers. … 2B Brandon Phillips returned to the Reds’ lineup Monday after missing the last five games with a strained left calf. … The Brewers have now hit back-to-back homers five times this season.