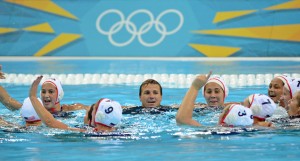 Adam Krikorian, coach of the United States women's water polo team celebrates in the pool with the team after winning the gold medal match against Spain, 8-5, in the Summer Games in London, England, on Thursday. (MCT Direct Photo)

LONDON (AP) — Five things to know about Thursday, Day 13 of the London Olympics:

—Solo saves the day as American women rack up medals.

—Pistorius, South Africa get another chance in relay final.

Usain Bolt greeted the excited crowd with a royal wave when he was introduced Thursday night.

Turns out the sprint king was also waving goodbye to his competition.

Bolt blew away the field in the 200-meter final, easing up as he crossed the finish line in 19.32 seconds to become the only man with two Olympic titles in the event.

With camera flashes dotting the seats throughout Olympic Stadium, Bolt repeated the 100-200 double he produced at the Beijing Games, leading a Jamaican sweep. Training partner and pal Yohan Blake was second in 19.44, and Warren Weir got the bronze in 19.84, nearly a half-second behind the champion.

“I’ve done something that no one has done before, which is defend my double title. Back-to-back for me,” Bolt said. “I would say I’m the greatest.”

The 6-foot-5 Bolt celebrated with a couple push-ups and also grabbed a camera from someone in the photographers’ well and trained it at the group who were clicking away.

Bolt’s victory dominated the track and field schedule, but American women were all over the London Games — helping the U.S. run its lead in the medals table to 90-80 over China.

Carli Lloyd scored in each half, Hope Solo made a couple of big stops and the women’s soccer team won its third straight Olympic gold medal, beating Japan 2-1 in a rematch of last year’s World Cup final and avenging the most painful loss in its history.

Before 80,203 at Wembley Stadium, a record crowd for a women’s soccer game at the Olympics, the teams put on a back-and-forth, don’t-turn-your-head showcase, proving again that these are the two premier teams in the world. Yuki Ogimi scored in the 63rd minute but the U.S. held on for the win behind Solo’s solid performance in net.

American teenager Claressa Shields danced, brawled and even stuck out her tongue. She also managed to win the first middleweight gold medal in women’s Olympic boxing.

The 17-year-old Shields, from Flint, Mich., was too much for Russian opponent Nadezda Torlopova, posting a 19-12 victory in the final.

“All I wanted was a gold medal, and I kept working towards it, even when people were saying I couldn’t do it. I’m too young. I couldn’t do it. There were girls who were going to beat me because of better experience, more experience. I proved them all wrong.”

Maggie Steffens scored five times and the U.S. women’s water polo team beat Spain 8-5 to take the Olympic tournament for the first time. The American volleyball squad beat South Korea in straight sets and will go for its first indoor women’s gold when it faces Brazil on Saturday in a rematch of the 2008 final.

Coach Geno Auriemma and the basketball team also moved into the gold-medal match one day after Misty May-Treanor and Kerri Walsh Jennings won an all-American final in beach volleyball.

Not to be outdone, the American men took the top two spots in the men’s decathlon (Ashton Eaton and Trey Hardee) and triple jump (Christian Taylor and Will Claye), raising the U.S. track and field total with three days to go to 24 medals.

The other big winner Thursday night was Kenya’s David Rudisha, who set a world record while winning the 800 meters in 1:40.91.

Among the track finals on tap for Friday is the men’s 4×400-meter relay, which took on added intrigue with Oscar Pistorius and South Africa making the field and a gutsy preliminary performance by Manteo Mitchell of the U.S.

The man known as “Blade Runner” because of his carbon-fiber prosthetics will get a chance to run for an Olympic medal after officials accepted South Africa’s protest over a collision and awarded an extra spot in the final. Pistorius already is the first amputee to compete on a Summer Games track.

Mitchell was halfway through the opening lap of the relay heat when he felt something pop in his left leg. He managed to keep going and helped the Americans tie for first with the Bahamas in 2:58.87.

A few hours later, doctors told him he had a broken leg.

“I heard it and I felt it,” Mitchell told The Associated Press. “But I figured it’s what almost any person would’ve done in that situation.”

The rest of the Olympic action Thursday:

The U.S. women’s team faced its first challenge of the Olympics, and found a way to advance.

Trailing early in the second half, Auriemma turned to his Olympic rookies and the group — led by Tina Charles and Lindsay Whalen — pressured Australia into turnovers and bad shots. That led to a pivotal scoring run in the third quarter of an 86-73 victory.

The Americans, seeking a fifth straight gold medal, next play France in a matchup of unbeaten teams. It will be the first time the two teams have played in the Olympics.

Edwige Lawson-Wade had 18 points to lead France to an 81-64 victory over Russia in the other semi.

Defending champion Maris Strombergs of Latvia eased into the semifinals after escaping an avalanche of crashes at the London Velopark.

Strombergs was among eight riders who advanced after three qualifying runs. World champion Sam Willoughby of Australia had to complete two more runs before sealing his own spot in the semis.

There were more than 20 crashes throughout the day. The London Olympic course, with its big jumps and tight corners, has proved to be one of the most difficult in the world.

Time trial world champion Connor Fields of the United States was unbeaten after three runs and also qualified directly for the next round.

Eva Risztov of Hungary led most of the way in a grueling open water marathon at Hyde Park, holding off a desperate bid to chase her down by American Haley Anderson.

The big crowd was hoping for a gold medal from world champion Keri-anne Payne, but the British swimmer finished fourth.

Risztov beat Anderson by four-tenths of a second after nearly two hours of racing around The Serpentine. The winner climbed out of the water, smiling and looking fresh. She even flexed for the big crowd.

Risztov retired from swimming after the 2004 Olympics, upset with her results and tired of the pool. She eventually decided to give open water a try, and it sure worked out in a big way.

Martina Grimaldi of Italy got the bronze in the 10-kilometer race.

It was the first gold medal for a European team in a sport that has been dominated by the Brazilians and Americans.

Brazil saved three match points to tie it after falling behind 14-11. But needing to win by two in the third set, Germany took a 15-14 lead and then won it when Emanuel’s spike landed just wide of the sideline.

Janis Smedins and Martins Plavins of Latvia took the bronze.

Chen totaled 422.30 points during the five-dive final, winning by a 55.80-point margin. She earlier won gold in the 10-meter synchronized and swept the platform events for the second consecutive games.

China has won six of seven diving gold medals with only the men’s platform remaining.

Brittany Broben, a 16-year-old from Australia competing in her first Olympics, took the silver at 366.50. Pandelela Pamg of Malaysia was third.

Russia led the technical routine of the team event — as expected.

Russia has won this event at the past three Olympics. Featuring Natalia Ishchenko and Svetlana Romashina, the pair that won the duet Tuesday, it collected a near-perfect 98.1 points.

The favorites competed to a Russian dance routine composed by Denis Garnizov, as Prince William’s wife, Kate, looked on from the crowd.

China was next with 97.0 points and Spain finished third with 96.2 points.

Medals will be handed out after Friday’s free routines, with points from both days added up.

The quartet of Tate Smith, Dave Smith, Murray Stewart and Jacob Clear gave Australia a lift with a surprising wire-to-wire win in the men’s 1,000-meter K-4.

It was Australia’s first team gold in canoe sprint — and took its overall tally in London to six after wins by cyclist Anna Meares, 100-meter hurdler Sally Pearson and sailors Nathan Outteridge and Iain Jensen in the past three days.

Danuta Kozak won her second gold of the regatta for Hungary, grabbing the top spot in the women’s single kayak 500-meter sprint.

With 57.80 points, Dmitrieva is 0.175 points ahead of Kanaeva going into Friday’s qualifying session with the ribbon and clubs. Liubou Charkashnya of Belarus was third.

Russia continued its big day in group qualifying, taking the lead over three-time world champion Italy. Russia, seeking its fourth straight Olympic title, scored 28.375 points for its routine with five balls, while Italy was .275 points behind.

CHICAGO (AP) — The Cincinnati Reds are a little perplexed by their five-game losing streak. They’re certainly not panicking, though.... read more