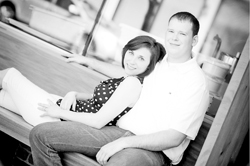 Sue and Ralph Ingles of Waterloo announce the engagement and forthcoming marriage of their daughter, Cassandra Ingles, to Andrew Stumbo, the son of Kathy and Gary Stumbo of Kitts Hill.

Cassandra is the granddaughter of Janet and Truman Turner and the late Juanita and Ralph Ingles Sr., all of Waterloo. She is a 2007 graduate of Symmes Valley High School and graduated from The Ohio State University with a bachelor’s degree in microbiology. She is employed at Battelle Memorial Institute in West Jefferson.

Andrew in the grandson of Emaline and the late Darwin D. Christopher of Morgantown W.Va., and Imogene and Silas Stumbo of Coal Grove. He is a 2007 graduate of Rock Hill High School and graduated from Ohio University with a bachelor’s degree in civil engineering. He is employed at Barge, Waggoner, Sumner and Cannon, Inc. in Dayton.

Mr. and Mrs. Lee and Mallory Morgan of Ironton announce the birth of a daughter, Kaelem Emerson. She was born... read more