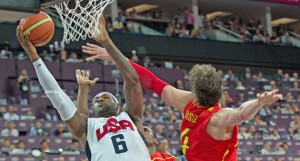 LONDON (AP) — Five things to know about Sunday, the last and 16th day of the London Olympics:

—The Who closes rocking closing ceremony.

LeBron James stood with both arms in the air, then hugged Kevin Durant before they headed to the bench.

They were quite the combination all day long.

James had a huge dunk and a 3-pointer in the final 2:50 and Durant scored 30 points, helping the U.S. win its second straight Olympic title with a 107-100 victory over Spain on the final day of the London Games.

Mike Krzyzewski, who has said he’s retiring as U.S. coach, emptied his bench in the final minute Sunday, then embraced James after the final horn sounded. The Americans hugged at midcourt, with guard James Harden holding a doll of the Olympic mascot.

Four years after beating Spain 118-107 in the Beijing final, the U.S. found itself in another tight one, unable to truly slow the Spanish down until the closing minutes.

James had 19 points on a day he joined Michael Jordan as the only players to win the NBA title, regular-season MVP, NBA Finals MVP and Olympic gold in the same year.

For Kobe Bryant, it was his last Olympic moment.

“This is it for me,” said Bryant, who scored 17 points and now has a second gold medal to go with his five NBA championships. “The other guys are good to go.”

The Who, the surviving members of Queen and the Spice Girls helped draw the curtain on the Summer Games when the closing ceremony turned Olympic Stadium into one big rock ’n’ roll party.

Prince William’s wife, Kate, and Prince Harry took seats next to Jacques Rogge, the president of the International Olympic Committee. They sang along to “God Save the Queen.”

The Olympic flag was handed from London to organizers of the 2016 Games in Rio de Janeiro. Rio then staged an eight-minute segment that showcased the Brazilian city, the first in South America to host the Olympics, featuring an appearance by soccer great Pele.

Britain finished its home Olympics with its biggest medal haul since 1908, but the top of the table belonged to the United States. The Americans topped the chart with 46 golds and 104 overall, easily clearing China’s second-place total of 87.

Part of the U.S. winning total belonged to the men’s wrestling team, which had multiple gold medalists for the first time since 1996.

Jake Varner got the second one when he won four straight matches to take the 96-kilogram freestyle, beating Valerie Andriitsev of Ukraine 1-0, 1-0 in the final.

Varner fell to his knees once the clock ticked to zero, soaking in the fact he had just accomplished the biggest goal of his life. He soon found Cael Sanderson, a gold medalist at the 2004 Athens Olympics who helped coach him to the title, and thanked him with a a leaping bear hug.

Britain’s final gold of the games went to super heavyweight Anthony Joshua, who rallied from a late deficit to upset defending champ Roberto Cammarelle of Italy on a tiebreaker.

Uganda picked up its first and only medal of the games when Stephen Kiprotich easily captured the Olympic marathon.

Kiprotich finished in 2 hours, 8 minutes, 1 second, holding off the Kenyan duo of Abel Kirui and Wilson Kipsang. Kirui finished 26 seconds behind Kiprotich, while Kipsang, the leader much of the race, faded late but held on for bronze just ahead of American Meb Keflezighi.

On an extremely warm afternoon, the marathoners wound their way through a scenic route packed with swarms of fans. Kiprotich had such a big lead near the finish that he grabbed a flag from the stands and wore it on his way to the finish.

The rest of the Olympic action Sunday:

Russia won its first men’s volleyball gold in 32 years by rallying past Brazil in five sets.

The Russians thought they had won it on Muserskiy’s kill in the fifth set and began to celebrate, but the officials awarded the point to top-ranked Brazil. After regrouping, Muserskiy came right back to spike match point.

It was Russia’s fourth gold medal in the event, most of any nation.

Italy won its fourth men’s volleyball medal in the last five Olympics by beating Bulgaria in four sets for the bronze.

The Russians won their fourth straight Olympic gold medal in the group event, easily beating Belarus. With Evgeniya Kanaeva winning the individual all-around Saturday, Russia has now won both rhythmic titles at every Olympics since the 2000 Sydney Games.

The Russians didn’t even bother waiting for the final standings, exchanging hugs and blowing kisses at the camera before the score of Ukraine, the last team to perform, was announced.

Italy was third after appearing to make mistakes on both its routines.

World champion Jaroslav Kulhavy of the Czech Republic won a two-man sprint to take the gold medal in the men’s mountain bike race.

Kulhavy made the most of a final steep ascent on the technical circuit in the English countryside to move ahead of Nino Schurter of Switzerland and then sprinted to the line.

Kulhavy, whose sole objective this season was the Olympic gold, put his hands on his head as if he couldn’t believe he won. He then tied a Czech flag around his neck like a cape while Schurter, a bronze medalist in Beijing four years ago, collapsed to the ground in exhaustion.

France won its second consecutive Olympic gold medal in men’s handball with a 22-21 win over Sweden. … Croatia won its first Olympic gold in men’s water polo, pulling away from Italy for an 8-6 win. The U.S. lost 10-9 to Australia to drop to eighth place. … Tatsuhiro Yonemitsu topped the men’s 66-kilogram freestyle wrestling division, beating Sushil Kumar of India to give the Japanese their first Olympic title in the sport in 24 years. … Laura Asadauskaite of Lithuania captured the women’s modern pentathlon. Samantha Murray of Britain was second and Brazil’s Yane Marques won the bronze.