Volunteers pay it forward for students 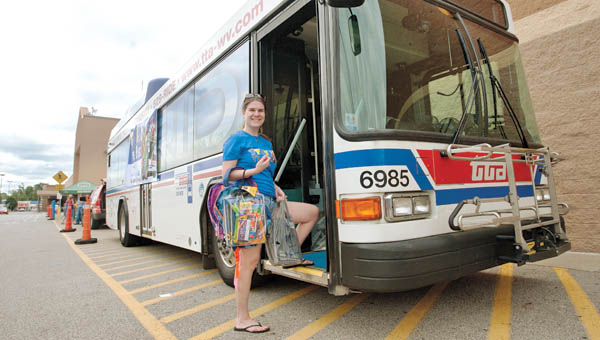 Kaylin Adkins, marketing coordinator for the United way of the River Cities, spent Saturday collecting supplies for area schools during the Stuff The Bus event.

BURLINGTON — His mom and his grandma had their mind on other aspects of their activities Saturday, but 5-year-old Garrett Napier of South Point was very definite about what he enjoyed doing.

“I liked getting on the bus,” the blond tike said.

The bus — a Tri-State Transit Authority Bus — was parked Saturday in front of the Walmart Supercenter in Burlington for the first-ever Stuff The Bus event in Lawrence County.

The project asked people to donate school supplies for area students returning to the classroom. All the donations were stored on the TTA bus.

The event was co-sponsored by several area groups, including the United Way of the River Cities, Ohio University Southern, Walmart and WKEE radio.

While Garrett, his twin sister Gabrielle and younger sister Ava got a peek inside bus, grandma, Kim McQuaid, and mom, Jenelle Napier, handed bags of notebooks and other school necessities to the volunteers.

“We’re fortunate to be able to provide for our kids. I know people who can’t afford these things,” McQuaid said. “I’m paying it forward.”

Ohio State Buckeyes’ first-year head coach Urban Meyer is still looking for the big play-maker that is needed in his... read more