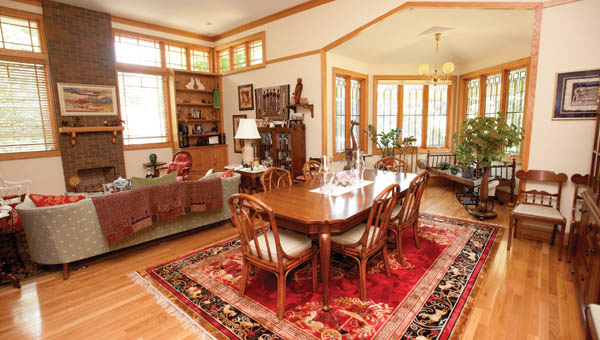 When Mary Jo Burton decided she wanted a new house, she did what anyone else would do. She started hunting, driving around her hometown of Ashland, Ky., until she saw just what she was looking for — a two-story red brick, circa 1920s, at the lower end of Woodland Avenue.Photography | Jessica St. James

When Mary Jo Burton decided she wanted a new house, she did what anyone else would do. She started hunting, driving around her hometown of Ashland, Ky., until she saw just what she was looking for — a two-story red brick, circa 1920s, at the lower end of Woodland Avenue.

So happy was she with her find, she bought it. Then, just as promptly, she tore it down.

For it was not the house that she craved. It was the lot.

That’s when the fun began in 2004 as Burton reached out to another maverick to come up with the design for her new abode — Frank Lloyd Wright, the 20th Century architect who shook up the world with such classics as Fallingwater, the Kaufmann department store heirs home outside of Pittsburgh, and the Solomon R. Guggenheim Museum in Manhattan.

It was at another museum in New York that Burton began her love of Wright’s work.

“It was in the Metropolitan Museum where they have a complete room,” she said. “I really, really like his style. I am a big nature lover and he was interested in bringing nature into homes.”

An avid gardener, Burton wanted to have a home that seemed to fit the landscape as organically as the surrounding trees. She reached out to Ashland architect and Ironton, Ohio, native Shawn Walker to come up with a design.

“We had gone through a number of variations for what she was looking for,” Walker said. “One day she said, ‘I always wanted to live in a Frank Lloyd Wright house.’ I said ‘Let’s see what we can do. I am not going to copy one, but design one that has that feel.’”

Walker chose a rosy tan brick for the exterior to create a one-floor plan that meanders across the lot, choosing lines and colors to allow it to be part of the landscape.

“I was using the lower lines so it follows the natural contours of the site and earth tones in the brick and shingle colors to match in with the surrounding trees,” he said.

Inside is a great room that provides the major living area to the house, starting with a modified sitting room off the foyer.

“I’ve always liked everything open,” Burton said. “I might be a tad claustrophobic. I like the idea of not being closed in by walls. I think it would be great to have a house in the woods with a temperate climate.”

Pulling in the eye is a modified Wright fireplace whose brickwork reaches to the ceiling in long, sleek, sharp lines with an obsidian hearth.

“He was very much into fireplaces, but his were monsters, often a divider between rooms, two-sided fireplaces,” Burton said.

From the sitting room lies the dining room and the nearby modified bow casement windows with individually pieced glass featuring geometric figures to give the appearance of leading.

In the bow of the house, Burton has taken another opportunity to bring nature indoors with a collection of plants arranged on the antique day bed of her father, Scoville Reynolds, who started Ashland Specialty, a wholesale grocery company, in the early 1930s and continues today.

Across from the dining room is the kitchen that features ridged glass cabinets, hardwood floors and burnished gold streaked marble counters. Off the kitchen is the solarium that overlooks Burton’s prized garden of perennials, all on terraced plots.

The back wing of the house features a guest bedroom and bath and master bedroom suite.

Although the house may be new, its décor reflects Burton’s love of antiques and her prized possessions. In every room are pieces from her collection of antique chandeliers from the cranberry glass from Burton’s homeplace that is hung in the foyer to the green-gold Vaseline globes off the dining room.

“I wasn’t going to give up the things I had lived with for many, many years,” she said.

The spool bed in the master bedroom displays her grandmother’s quilt with a framed shadowbox of a baby outfit and bonnet of Burton’s. Over on built-in shelving is a collection of childhood dolls and toys.

“Memories are important,” she said. “These were things that were a part of my childhood. It is kind of nice to have a glance at them and remember when I was 8 years old.”

A leap back in time