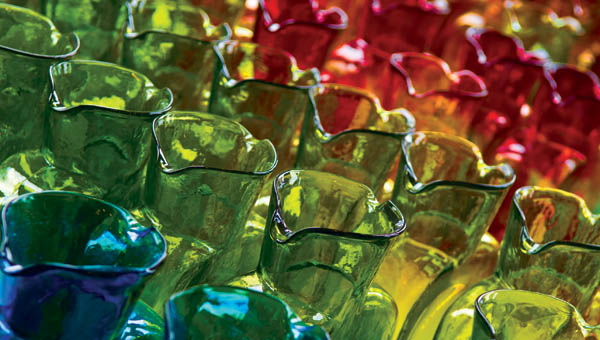 The ovens are hot; the molten glass is glowing at the end of those poles but the final product is always picture perfect, be it a bunny rabbit, a pitcher, a plate or a shiny red apple. Photography | Howie McCormick

Ricky Chapman stood at one end of a long metal tube and pressed his mouth against it. Blowing into it, he and fellow artist Charlie Chaffin watched as the heated glass at the other end expanded and became first a small round blob and then, with the skill of Chapman and Chaffin and a little time, a breath-taking, amber-colored pitcher.

Not far away, Randy Rider blew one blob of molten glass after the other into bunny rabbits, one ear folded slightly to give the rabbit a touch of humor and friendliness.

The ovens are hot; the molten glass is glowing at the end of those poles but the final product is always picture perfect, be it a bunny rabbit, a pitcher, a plate or a shiny red apple.

It is, after all, what Blenko Glass Company is famous for.

The founder of the Blenko Glass Company, William John Blenko, brought his art to America from England in 1893. He loved the ornate and colorful stained-glass windows in the cathedrals there and thought he could do the same thing in America — and do it better here.

The artisan started blowing red sheet glass and that’s the product that launched his business, first named Eureka Art Glass. While Blenko started his business in Kokomo, Ind., both the name and the location of Blenko’s business were changed when the Englishman settled in Milton, W.Va., in 1921.

Today, Blenko is the only U.S. manufacturer of mouth-blown sheet glass.

Blenko’s signature piece is the water bottle, which can also be used as a flower vase. It is also Blenko’s most popular item.

The thing about handmade art glass, Trippe said, is that when you pick it up, you know it was made with human hands, human emotions and human creativity.

“You pick it up and you can feel the people on the other side,” she said. “It was made with care and an appreciation for art.”

And another thing about hand-made art glass: Every piece is different. You won’t find an exact same piece in anyone else’s living room, even if you both bought your vases at Blenko on the same day.

And one more thing. That vase or pitcher or bunny rabbit won’t have “Made In China” stamped on the bottom. It is West Virginia-made and world-class.

“It’s important for people to remember the value of having an American-made product,” Trippe said.

For a number of years Blenko made the awards for a country music awards show. It still makes the awards for the Appalachian Film Festival and the National Frozen Food Award (It’s a penguin,) and the Stetson Award (Yep, it’s a cowboy), to name a few.

That that creativity has keep the business going — and blowing — for nearly 100 years.

All dressed up, places to go

Sonya Hall recently took the reins of a non-profit organization that seeks to fix just that: Help women change their... read more