When is a bridge not a bridge? 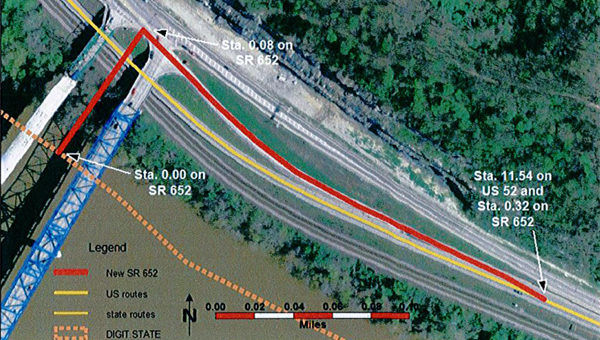 That said, ODOT has taken that purist directional philosophy to create the shortest state route in Lawrence County and one of six state roads in the district that has the distinction of being less than a mile long.

North is north and south is south and don’t think about adding an east or west to those directions, at least if you’re talking with someone from the Ohio Department of Transportation.

“We operate on cardinal direction,” Kathleen Fuller, spokesperson for ODOT’s District 9, said. “There is only north, south, east, west.”

No northeast. No southwest. You get the picture.

That said, ODOT has taken that purist directional philosophy to create the shortest state route in Lawrence County and one of six state roads in the district that has the distinction of being less than a mile long.

And for trivia seekers or those looking for a unique, but fairly pedestrian, thrill, it can be found right on the way to South Point.

But first some background. There are only two bridges that cross the Ohio River that are owned by the river’s namesake state — the Grant Memorial Bridge at Portsmouth and the Ironton-Russell Bridge.

The bridges upstream from Ironton that lead from Coal Grove to Ashland, Ky., have always been touted as Bluegrass State-born and bred. But that’s not quite right. There’s a section at the Ohio side of the river with some not too prime riverbank real estate that’s pure Buckeye. ODOT will dot the “I” on that.

With that in mind, ODOT had to come up with a way to incorporate that approximately eighth-tenths of a mile that’s on those bridges into its system of roads.

A little magic, please. Hocus Pocus. Alakazam. Presto-Chango. You are no longer two separate bridges. You are now a single road.

“Those two structures are like a divided highway,” Fuller said. “One is going northbound and one southbound.”

And for an eighth-tenths of a mile those bridges become State Route 652, the latest highway in the state’s system.

“We had to give it a designation,” Fuller said. “It is added to our state highway system because it is a federal aid route. With federal law changes it has to be on our system.”

That means it gets federal funds for construction and the like.

But the newest state route doesn’t end at the river’s edge, at least when going north.

The ramp that leads down to U.S. 52 heading straight for South Point doesn’t just drop off the roadway universe, shunned and abandoned in a sea of tar and asphalt. Not on your life. It’s got a name too.

OK. So what about the exit on the other side, the one that leads from U.S. 52 onto the Ashland-Coal Grove Bridge? What kind of jazzy name does it get?

In this case, once anonymous, always anonymous.

Outfielder Jay Bruce belted a three-run home run in the bottom of the ninth inning to give the Cincinnati Reds... read more