Working for the client 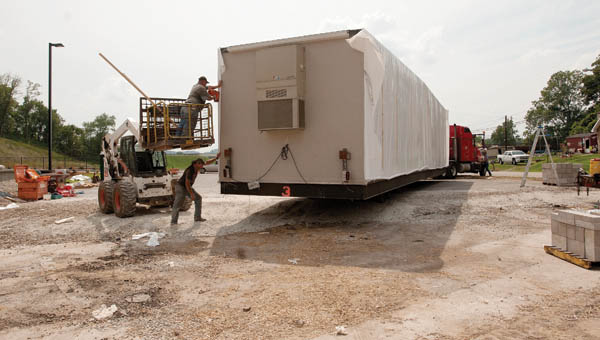 Workers move modular units located outside the new St. Mary’s Medical Center they are relocated to locations in Proctorville and Aid Township.

Creating a high-tech agency with a one-stop mindset by its clients and staff is the goal behind increasing consolidation moves by the Ironton-Lawrence County Community Action Organization as it calls on that technology to link eastern end expansion with its Ironton headquarters.

In October the CAO expects to open family medical centers at Aid and Proctorville, recycling the modular units used by its Ironton doctors while the new St. Mary’s Medical Ironton Campus was under construction.

The Aid office will be set up at the former King’s Daughters Medical Center, while a new facility will be built outside Proctorville across from Fairland East Elementary School.

Both expansions will be funded with a portion of a $650,000 grant the CAO recently received from the U.S. Department of Health and Human Services.

“(We will work) more and more on an online basis,” Ralph Kline of the CAO said. “There is no reason why a case manager at the Proctorville site can’t fill out an application instead of (the client) coming to Ironton.”

With the range of services that the CAO offers from Headstart to heating assistance to drug, and alcohol counseling to job help, one client may need more than one of these services.

Kline cites a case where a woman recently had to take over care of her grandchildren when their mother was injured in a car accident. The grandmother needed to find medical care for the children along with WIC food assistance.

At the same time the mother also suffered from drug addiction and could be a candidate for a CAO family guidance program.

In the past that one client with multiple needs would have to go to a variety of locations to fill out duplicate forms to get help. Now the goal is for a single case manager to set a client up with all the needed services.

In another scenario a couple finding themselves laid off from their jobs struggle to pay their bills. Again they would be candidates for multiple CAO services from housing assistance to counseling.

“They may have issues with keeping their house,” he said. “That can lead to depression. You see individuals with long-term issues more prevalent. This gives a more customer-service approach. We can provide that service to all and be more responsive to the customers.”

Already case workers once at the CAO headquarters on North Fifth Street have moved to the Workforce Development Center at North Third Street and the health component of the family guidance centers is at the clinic sites now.

But exactly how the proposed consolidation will affect the CAO’s approximately 400 employees Kline isn’t sure, but acknowledges there will be job changes and possible layoffs.

“There will probably be downsizing,” he said. “We don’t really know. It might be a temporary thing until you get from Point A to Point B. It is not about staff not doing a good job. But you can no longer do what you did in the past.

“Change is really difficult for people, but you have to change to do business in today’s world.”

SOUTH POINT — With Friday’s groundbreaking at the five-acre site for the new Intermountain Electronics complex, work will start on... read more