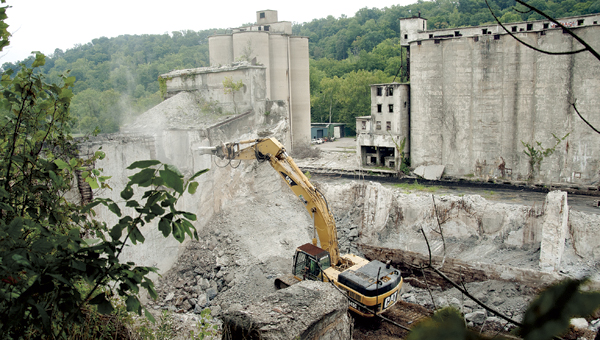 Workers from Evans Landscaping, of Cincinnati, spend the day tearing down a structure at the old Alpha Portland Plant Tuesday.

This week crews from Evans Landscaping of Cincinnati are bringing down a freestanding wall behind the three silos on the property.

“And they have knocked a hole in one of the silos,” said Dan Distler of Keramida, Inc., the firm in charge of the remediation of 13 acres of the 100-plus acreage. “Behind the silos is part of what looked like a bombed out building. It looked like it had rooms. They are in the process of dropping it.”

When that wall is brought down, work will start on the silos.

“They will use a crane to drop it halfway,” he said. “Then they will use the equipment on site.”

Before the demolition could start, asbestos abatement, which began in May, had to be completed. That abatement took about two weeks longer than anticipated because additional pockets of asbestos were found.

“The site had been abandoned for 40 years,” Distler said. “As things fell apart and dropped to the ground, it got covered up and you don’t find it unless you start moving things around.”

The environmental firm is also waiting on the results of a soil remediation analysis where there were four or five different areas with chemicals of concern found, including heating oil, lubricants and diesel fuels, Distler said.

The current plan is for the acreage, once it is officially declared remediated, to be the site of a distribution warehouse to be constructed by Marietta Industrial Enterprise, a material handling company.

Demolition timeframe is set to take between 12 to 16 weeks. Then Keramida will submit a report to the EPA that the land is now clear.

“They will basically review our report and make a determination,” Distler said. “I can tell you we don’t submit a report unless it is clean.”

Ordered to pay back more than $2,200   The former employee accused of stealing public money from the Lawrence County... read more