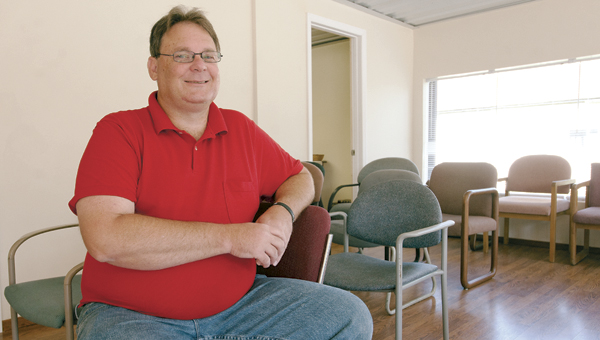 That’s the motto of a new non-denominational church in Ironton.

Brent Baker, pastor of the newly formed Joshua Church, said its mission will be to reach, teach, grow and serve the Ironton community.

“I know we are right where we are supposed to be,” Baker said of the building located on South Third Street next to Dufore Chiropractic.

Baker formerly pastored at Central Christian Church, but left last October. After having group Bible studies in his home, Baker said he felt God wanted him to find a more permanent home for the worshippers.

The name Joshua Church was taken from the Joshua Walk event Baker organized last year, which brought area church members to the streets of Ironton to march and pray for the needs of the city.

“We wanted familiarity,” Baker said. “People know what we were doing and what we stand for.”

The building on South Third Street is small, but Baker said it meets the needs of his congregation.

The front room of the building seats about 40 people. There is a fellowship area with tables and chairs, a kitchenette, nursery, prayer room and a junior church area for children’s Bible study.

Baker preached his first sermon at Joshua Church last week to about 30 people. He said 15 people made decisions to join the church officially.

The style of worship is non-conventional and non-traditional, the pastor said.

Baker said the church will pray for the needs of the people both within the church and outside. He also said church members will go out into the community to minister people. “The Bible says go and seek the lost,” Baker said.

“Not to stay at the home base and wait for them to come to you.”

And even though the church is in its infancy, Baker said he hopes the congregation will grow out of its new home.

This Sunday at 10:30 a.m., the church will have its grand opening and what Baker calls a “new beginning.”