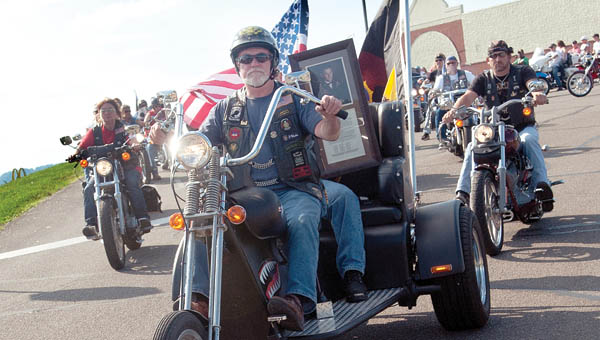 Participants in the Parade of Heroes event take off from the Ironton Hills Shopping center as they go on their annual run through the streets of Ironton at the Rally on the River event.

Bikers come in droves to hang out, have fun at Rally on the River

Bill Montroso still remembers the first movie he saw at the Ro-Na Theatre.

“It was 1963 and the movie was ‘Journey to The Center of the Earth’ with Pat Boone,” Montroso said. “The Ro-Na was beautiful.”

Now almost 50 years later, Montroso shared those memories as he sat by his stand at Rally on the River, slicing green peppers as thin as spaghetti strands, for the Bahama Mamas he sold throughout the weekend.

This was the ninth annual rally put on by Friends of Ironton, Inc., a group of civic-minded volunteers who last year gave the $20,000 net proceeds from that event to the restoration of the Ro-Na, one of the projects they have adopted.

“We are happy to be here,” Montroso said. “It is our hometown. You have a group of good people running it.”

By Saturday night, Montroso expected to have cut up five bushels of peppers and grilled about 400 Italian sausages for his signature sandwich.

This year close to 120,000 were expected to cruise into Ironton to hang out at rally headquarters on South Second Street. On Saturday afternoon more than 150 bikes crowded the AutoZone parking lot as more cyclists roared under the Third Street historical pennant honoring James Rogers, founder of Iron Bank in 1851.

For Chris Robinson and Cliff Thatcher, enthusiastic bikers who make the event rounds, this was the first time to come to Ironton’s rally. As they sipped cups of beer, they gave it a thumbs-up but with qualifications.

“It needs to be bigger,” Robinson said. “They need more room, more vendors. But they have pulled in some good bands.”

Down from the makeshift food court was Larry Franz with Bikers for Christ, who said his ministry has reached out to many during the rally.

“We try to meet the needs of the people,” he said.

The ministry handed out Bibles and guided people to put in their prayer requests into a black shellacked box ornamented by two crosses.

“They may have problems with alcohol, drugs, family problems or somebody is sick,” Franz said.

Each night members of the group opened the box to pray over the requests.

Bryan and Kim Jarvis of Ashland, Ky., came over on their 1974 Kawasaki that last year won them prizes in the bike show.

“I like the vendors with the leather pants and the T-shirts and the food,” Kim Jarvis said. “I look forward to the food. And the bands. They have some great bands.”

Det. Chris Bowman to get temporary appointment   The city of Ironton will be looking for a new police chief... read more