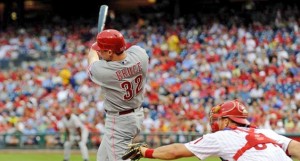 Cincinnati outfielder Jay Bruce (21) had three hits including a double and two runs batted in, but it wasn’t enough as the Reds lost 12-5 to the Philadelphia Phillies on Monday. (Photo Courtesy of the Cincinnati Reds)

Jay Bruce and Chris Heisey had three hits apiece and the Reds got five runs off Halladay, but still lost to the Philadelphia Phillies 12-5 on Monday night.

“We haven’t ever hit Halladay like that,” Reds manager Dusty Baker said.

It was a wasted effort.

The Phillies have won seven straight over the Reds and 12 of 13, dating to 2010. This was their first meeting this season.

“Halladay was leaving some pitches up and we were hitting him,” Leake said. “The goal is to keep the lead, but they hit me well.”

The NL Central-leading Reds lost for just the third time in 11 games.

The five-time defending NL East champions have won three straight, but are eight games under .500.

After the Reds took a 5-4 lead in the fifth, the Phillies answered in the bottom half.

Pierre singled and scored on Utley’s RBI double. After Howard was intentionally walked, Mayberry ripped an RBI single to tie it. Brown followed with a shot down the line that scored two to chase Leake and give Philadelphia a 7-5 lead.

“Leake couldn’t get the ball down,” Baker said. “There were too many pitches up in the zone.”

Utley hit a sacrifice fly in the sixth and Mayberry connected off Jose Arredondo to extend the lead to 10-5.

The Reds loaded the bases in the first on three straight singles to start the game. Bruce then ripped a line-drive double off the right-field wall that should’ve scored two. But Heisey stopped after rounding third and was tagged out at the plate.

“Probably my fault for not getting a bigger jump,” Heisey said.

Scott Rolen’s RBI groundout made it 2-0.

Pierre hit a double, stole third and scored on Howard’s two-out single to cut it to 2-1 in the bottom half.

Howard drove one way out to right to tie it at 2 in the third. Kratz went deep to left-center to make it 3-2 in the fourth.

Kratz has seven homers in 61 at-bats. The 32-year-old local boy has turned into a fan favorite in his first extended action in the big leagues after 11 seasons in the minors. Filling in for All-Star catcher Carlos Ruiz, Kratz is hitting .295 with more extra-bases (13) than singles (5).

Cincinnati scored three runs with two outs in the fifth on Heisey’s RBI double, Bruce’s RBI single and a botched rundown that allowed Phillips to score after Bruce was picked off first.