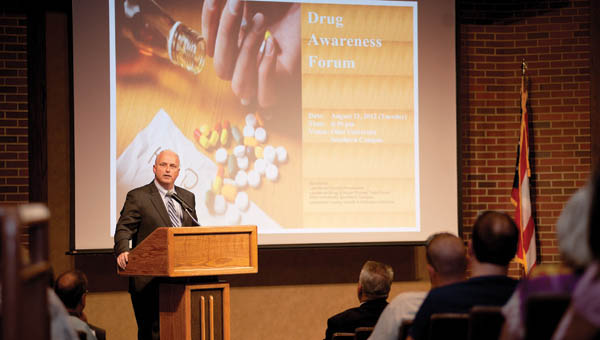 Eventgoers gather at Bowman Auditorium at Ohio University Southern as Dr. Terry Johnson speaks about the drug epidemic that has taken during a Drug Awareness Forum Tuesday evening.

How many people are affected by the prescription drug epidemic in southern Ohio?

That was the message of an awareness forum Tuesday evening at Ohio University Southern.

Local officials, law enforcement officers, drug treatment agency representatives and community members came together to learn about the growing concern of prescription drug addiction and the efforts to eradicate it.

Forum speakers noted how, over the past 10 years, opiate drug abuse has taken over the lives of many people in Lawrence County and affected the community as a whole.

Assistant Prosecuting Attorney Brigham Anderson said when he first joined the prosecutor’s office, cocaine was the drug of choice. Now, prescription drugs account for the majority of cases he sees.

“Drug abuse accounts for 85 to 90 percent of crimes I prosecute,” Anderson said.

“The total over all costs of drug abuse in the U.S. exceeds $600 billion annually,” Lucas said. …“We have been fighting the war on drugs for nearly four decades. Despite all this effort and all the money, the addiction keeps a firm foothold in our area.”

Tim Sexton, director of the Lawrence Drug and Major Crime Task Force, said in his 30 years of law enforcement, he has never seen a drug problem as pervasive as opiate pain pill addiction.

Sexton, with help from the OUS media center, produced an educational video, which was previewed at the forum.

The aim of the video was threefold: Make the community aware of the pain pill problem, educate people on prevention and provide people with hope.

In the video, Sexton highlighted how many of the pills get into Lawrence County.

“People will travel to Florida, go to unethical clinics and bring back a concoction of pills,” he said.

The problem also originated right here in the community.

Ed Hughes, president and CEO of the Counseling Center in Portsmouth, said drugs like oxycodone were prescribed in the Tri-State first, and then began to spread out into the nation.

And the problem is creeping into the teen population faster than any other drug has, Hughes said in the video.

Johnson, former Scioto County coroner, was instrumental in getting House Bill 93 passed in the legislative May 2011.

“Legislatively, there were things that needed to be done, but it didn’t solve the problem,” Johnson said. “It took the pills away, but people are still addicted.”

Johnson said to fight the problem, law makers and community leaders and members must change the way they think about solving the problem.

Hughes suggested pain pill addiction should be treated like any other disease with multiple episodes of treatment that may have to become more intense over time.

And treatment is not only available for those addicted to pain pills, but their family and friends as well, in the form of support groups.

At his Portsmouth center, Hughes offers a free family support session every Wednesday at 6 p.m.

Also to help spread the message of prevention and support, Sexton and the drug task force will offer screenings of the video shown at the forum for community groups. The forum and the video will also air on the OUS station, Channel 25 for Time Warner Cable customers.