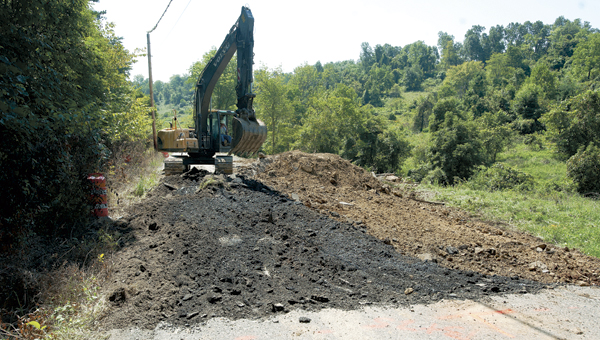 Workers spend the day on County Road 16, in Aid Township, repairing damaged roads caused by landslides during the spring of 2011.

Work began this week on contracted landslide and paving projects throughout Lawrence County and the $3.2 million price tag is triple the standard for the county engineer’s office.

“Normally, we do $1 million in contract work in a year,” County Engineer Doug Cade said.

But the ongoing efforts to correct roadway and bridge damage caused from the massive rains in the spring of 2011 has shot that figure up, since almost $2 million of it will go to repair six of those landslides.

All of these will be covered by Federal Highway Administration funds.

“All of these projects were competitively bid and local contractors had the ability to bid on them,” Cade said. “We have 14 other large landslides still be bid.”

The floods of 2011 caused approximately $12 million in damages, either in hillsides flowing onto county roads or bridges washed away. The majority of the projects from that damage are eligible for funds from the Federal Emergency Management Agency that will cover 75 percent of the cost.

Earlier in the year FEMA investigators came to the county multiple times to look over the damaged sites consolidating them into 187 projects. Some of the projects are also eligible for funding from the Natural Resource Conservation Service and the Federal Highway Administration.

At the same time slide repairs are ongoing, Shelly Company from Thornville will take care of almost $1.4 million in resurfacing on the following roads: County Roads 23, 43, 128, 57, 775, 59, 123 124 and 60, Sand Road in South Point and intersections in Proctorville. Resurfacing will be funded by the Motor Vehicle Gas Tax and the Ohio Public Works Commission.

The projects are expected to be completed by Thanksgiving.