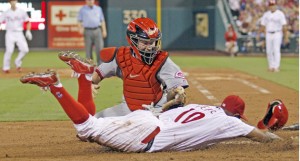 PHILADELPHIA (AP) — The Cincinnati Reds got a taste of October baseball against a team that is used to going to the postseason.

John Mayberry Jr. hit an RBI single in the bottom of the 11th inning to lift the Philadelphia Phillies to a 4-3 victory over the Reds on Thursday night.

In a game that lasted 4 hours, 24 minutes, the Phillies squandered opportunities in the ninth and 10th before getting a key hit to split the four-game set. They took over sole possession of third place in the NL East for the first time since April.

Todd Frazier drove in all three runs for the NL Central-leading Reds, who were seeking their first series win in Philadelphia since 2006.

While the five-time defending division champion Phillies aren’t going anywhere this season, they gave the Reds all they could handle. The teams met in the 2010 NLDS, with the Phillies sweeping the series.

Kevin Frandsen led off the 11th with a single against Alfredo Simon (2-2), and Chase Utley followed with a double. After Ryan Howard was intentionally walked, Domonic Brown hit a bouncer to first that caused Frandsen to be forced out at home.

Mayberry then grounded a single to left to end it.

“I feel like I was in a fight, and I lost,” Phillies manager Charlie Manuel said. “I feel drained. I kept waiting for somebody to come home.”

“It was phenomenal,” Mayberry said. “Everybody threw the ball extremely well.”

In a matchup between NL Cy Young Award contenders, neither Johnny Cueto nor Cole Hamels was sharp. Cueto was trying to become the first 17-game winner in the majors. The dreadlocked righty allowed two runs and five hits in five-plus innings.

Hamels gave up three runs and six hits in six innings. He remained unbeaten against the Reds. The lefty entered 8-0 with a 1.26 ERA in 10 previous starts, including a five-hitter to finish off the sweep in the 2010 postseason.

J.J. Hoover pitched out of trouble in the ninth and 10th. Hoover retired Brown on a double-play grounder with the bases loaded to send the game to extra innings.

“Things like that happen, but we came up with a tough win,” Brown said.

After Jimmy Rollins hit a double to put runners on second and third with one out in the 10th, Hoover got Brian Schneider on a grounder to third, and Juan Pierre on a popup to third.

Down 3-2, the Phillies rallied in the eighth against relievers Sean Marshall and Sam LeCure. Brown, Mayberry and Erik Kratz hit consecutive one-out singles to load the bases. Rollins then hit a shallow fly to left. Brown scored ahead of Ryan Ludwick’s off-target throw to tie it at 3.

Despite bright skies, it rained hard in the first inning. The Reds loaded the bases with one out on two singles and a walk. Frazier drove in a run on a groundout to third for a 1-0 lead. Phillies shortstop Michael Martinez then saved a run with a spectacular, diving grab on Miguel Cairo’s grounder in the hole and made a strong throw to get the out and end the inning.

“The mound wasn’t good, but you have to battle through it,” Cueto said through an interpreter. “You have to keep working.”

Frazier ripped a two-run double for a 3-0 lead in the sixth.

The rain stopped by the second, but the field was a little spongy for a few more innings.

Buckeyes’ WRs out to answer doubters

COLUMBUS (AP) — The criticism from head coach Urban Meyer got so bad that about the only respite for Ohio... read more