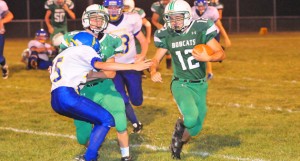 The Green Bobcats gave a dominating performance in all facets of the game as they opened the season with a 40-0 win over the Manchester Greyhounds.

“We played well. I was pleasantly surprised. You usually don’t play that well in your first game,” said Green coach Dan McDavid.

“What we lacked in execution we made up for in our effort. We played hard.”

The Bobcats had two runners go over the century mark. Levi Mollett ran 12 times for 108 yards and a touchdown while Rob Applegate carried eight times for 101 yards and two touchdowns.

Kyle Frazier added 60 yards on eight carries and Clay Applegate ran for 36 yards on three carries and also came up with an interception on defense.

Frazier led the defense with 11 tackles and Kaden Sampson had 10 tackles and a fumble recovery. Dylan Stapleton had six tackle and blocked a punt while Mark Allen recovered a fumble.

Rob Applegate had a pair of 10-yard touchdown runs in the first quarter to put Green up 14-0.

Frazier’s 3-yard scoring run made it 21-0 and Mollett returned an interception 97yards for a score to make it 27-0.

The Bobcats built a 33-0 first half lead with Clay Applegate hit Allen with a 28-yard scoring pass, the only pass Green threw.

Green capped the scoring on a 31-yard run by Mollett in the fourth quarter.

The Bobcats host Millersport next Friday.