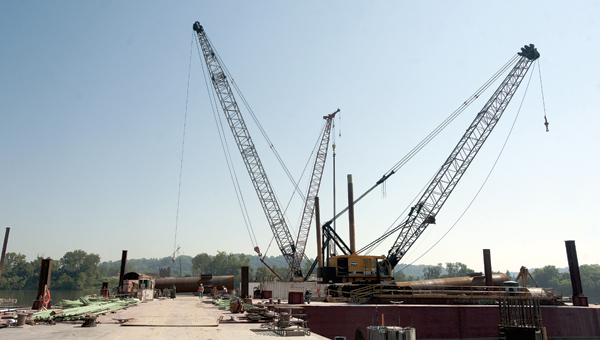 With her twin towers and graceful white cables soaring upward in inverted V-formations, the new Ironton-Russell Bridge will be a beauty when she’s completed.

But more than that, she’s going to be functional, getting people in the Ironton and Russell, Ky., areas back and forth across the Ohio River.

Construction is underway on a bridge for which Irontonians have been waiting for literally years.

Where they are now

“It’s going well,” David Bame, area engineer for Ohio Department of Transportation District 9, said of the construction. “We’re about 10 percent complete with 180 days under out belt.”

Pre-construction work included relocating a few utilities near the work site and relocating some aquatic muscles that live in the water on the riverbank — something the Ohio Environmental Protection Agency required.

“What you see is the (construction) flotilla out there drilling,” Bame said. “They drill six shafts which go into the foundation. They’ve completed two (shafts for Pier 3) and they’re on the third shaft now.”

Travis Crawford, safety manager for Brayman, said each of the six shafts, or caissons, weigh 25,000 pounds. The auger used in the process, he said, goes deep into the bedrock to make sure the pier is on literally a firm foundation.

“It’s a different construction method for us. Brayman has done it in other states,” Bame said.

“It was Brayman’s idea,” ODOT spokeswoman Kathleen Fuller said. “It saves money and it speeds up the process. They’re not driving sheeting (for dams to hold back the water while piers are built). They pour the concrete inside.”

In the short term, the piers must be completed. After that, bridge watchers can look for other additions to the span such as the deck and those white cables.

Some facts and figures

The new bridge is between Second and Jefferson streets and will connect near the Russell, Ky., viaduct on U.S. 23. It will cost $81.2 million and should be completed by the fall of 2015. The new span will replace the bridge built in 1922.

There are three cranes in the water that are part of the flotilla used to build the bridge. One has a 275-ton boom; the other two have 150-ton booms.

Who’s on the job?

Fuller said the number of employees on the job site varies depending on what subcontractors are at the site and what is being done.

Estimates put the number at 35 to 45 at any given time.

What about the falcons?

ODOT will work with the Ohio Department of Natural Resources to relocate the falcons to the new bridge.

What about the name?

Fuller said the state legislature must approve any new name for the bridge. Suggestions for new names must be submitted to that body.

What about the old bridge?

Once the new span is in place, the existing bridge will be demolished. Fuller said the initial plan is to disconnect the old span and lower it onto a barge to be hauled away.

“They (Brayman) could propose something else and we’d take a look at it,” Fuller said. She said the way in which the old bridge is dismantled has to do with navigation on the river and keeping the waterway open for use.

Ironton landmark slated for demolition after storm damage   Through the back door was the best way into the East... read more