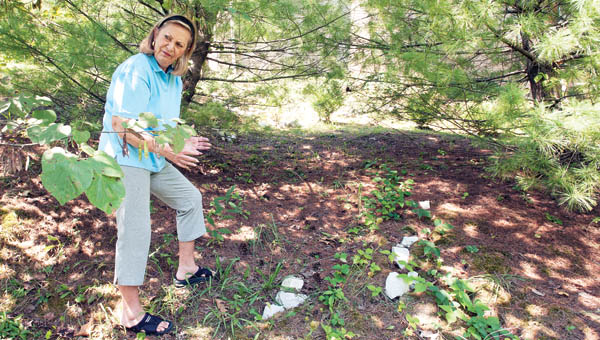 Ironton resident Carolyn Reeves describes the hillside slip woes she is enduring in her backyard. She wants the adjourning property owner and the City of Ironton to alleviate the problem.

People with complaints about their neighbor’s property got council’s attention Thursday.

Everett Reeves, of 109 Woodlawn Drive, told council his rear yard is being slowly ruined by a landslide caused by a neighbor’s faulty gutter system. The property in question is on Carl Drive on a hillside above his house.

Reeves said he and his wife, Carolyn, discovered the problem in the spring and have called city offices for assistance but have not received the help they need. Reeves said he spoke to city code enforcement officer John Willis about his problem.

“He said she was in violation with her downspouts and agreed to give her a call. She never called him back and June 28 he sent her a letter.” Reeves said. A month later Reeves said Willis told him the property owner agreed to make the repairs but the repairs have not yet been made.

Reeves said part of his problem with rain water runoff and the landslide is also caused by water running off the hill above Carl Drive and down the hill to his house. He said there was once a ditch along Carl Drive that collected the water but over time it has been clogged and now doesn’t work.

“This is serious,” Reeves said. “It’s been neglected for years. This is hurting people’s property.”

Reeves said some of his neighbors have been forced, at their own expense and on their own property, to create drainage ditches to handle the water when it rains.

Reeves wants the city to repair the ditch along Carl Drive and require the Carl Drive property owner to fix her gutter problems.

“Have you filed any civil suit against this person?” Councilman Aaron Bollinger asked. “This sounds like a civil issue.”

“But we still have a code violation,” Reeves countered.

Mayor Rich Blankenship told Reeves to call his office and arrange a time to meet with city officials.

Also Thursday, Yvonne DeKay Sinnott, who owns Yvonne DeKay School of Dance at 612 S. Third St., complained that property owners near her dance studio do not cut grass and control weeds and allow junk cars to collect on their properties.

“We need to fine businesses for not keeping their property clean,” Sinnott said.

Councilwoman Beth Rist noted one piece of property in question is owned by the state.

“Can we just ask the state to get out there and clean things up?” Council Chairman Mike Lutz asked Blankenship.

Lutz asked Finance Director Kristen Martin to include the weeds complaint on the agenda for finance committee discussion. The finance committee will meet in special session at 5 p.m. Thursday in council chambers at the city center.