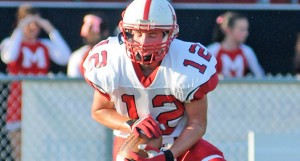 This one will be “A Tale of Two Offenses.”

Having seen the Wheelersburg Pirates spread offense of hitches and bubble screens and option plays, the Coal Grove Hornets know what to expect defensively.

The Hornets’ offense is no secret. The Pirates know they are going to get a power running game that wants to control the clock.

Last week, Wheelersburg lost 32-27 to Ironton as quarterback Eddie Miller hit 22 of 30 passes for 201 yards with a touchdown and an interception. He also ran 22 times for 104 yards as he accounted for 305 of the Pirates 390 total yards.

Dylan Miller had nine receptions for 66 yards as four different players were on the receiving end of passes.

Using their contrasting style, Coal Grove pounded out 272 yards on the ground on 52 rushing attempts. Quarterback Alex Bare was 4 of 4 passing for 47 yards and he ran seven times for 42 yards.

Brandon Hogsten led the Hornets with 93 yards on 11 carries while Kyle Estep ran 20 times for 83 yards.

There will be no surprises this week for Fairland after their stunning 34-14 win over Portsmouth West to open the season last week.

Meigs is under first-year head coach Mike Bartrum who is a graduate of Meigs and went on to star at Marshall and then played 14 years on the NFL where he won a Super Bowl ring with New England as a long-snapper and backup tight end.

Although Meigs lost 24-6 to Coal Grove last week, the Marauders did have success moving the ball. Besides the one touchdown, they were inside the red zone three more times including twice inside the 10-yard line.

Meigs is led by running back Dillon Boyer who had 81 yards on 16 carries last week. First-year quarterback Kaileb Sheets was 5 of 16 for 70 yards and an interception. Jordan Hutton ran four times for 22 yards including an 11-yard touchdown scamper.

The Southeastern Panthers surprised Northwest with a 23-21 win in the coaching debut of Colton Coy.

Quarterback Travis Abner threw for 166 yards including a touchdown in his first varsity start. He also ran for 73 yards and added a long run on a kickoff return.

The Panthers used a fumbled punt recovery to set up their first score and Gage Hurles returned a kickoff 75 yards for a touchdown. Dylan Miles kicked three field goals including a school-record 42-yarder to end the first half.

Miles hit a 35-yard field goal with six minutes left that put the Panthers up for good.

The Panthers got off to a bad start last week with a 33-7 loss at Oak Hill. Friday’s game will be the season opener for the Pioneers.

Despite the loss to Chesapeake, Wayne was 12-2 last season and finished as state champions in Class AA. They lost just five players and return one of the state’s top running backs in Brandon Spurlock (5-8, 180). He ran for more than 1,7000 yards last season and scored 30 touchdowns.

The Panthers were not only hurt by graduation, but they lost fullback and linebacker Chad Meadows for the season with a broken leg.

Chesapeake was also missing lineman Mark McMillian who may return this week.

Despite some key losses including running back All-Ohio Luke Keller, the Lucasville Valley Indians still have a little punch in the offense.

The Indians opened the season with a 36-24 win over the Portsmouth Trojans as they racked up 397 total yards, all but six coming on the ground.

Rock Hill is breaking virtually a new offense and defense with only two seniors on the roster including Shane Harper who suffered a knee injury and could possibly miss the first four games of the season.

The Pointers were schedule to play Our Lady of Mount Carmel from Canada, but they were informed a few weeks ago that they would be unable to make the trip and sent South Point scrambling for a game.

A Division VI school, the Eagles have implemented a ball-control offense and an attacking defense with a commitment to raise the level of their competition by scheduling Danville, Bishop Ready and South Point.

This will be a game of similar programs. Both schools battle numbers and can not afford any injuries.

The Lakers lost to Fairfield Christian 55-17 last week while the Bobcats rolled past Manchester 40-0.

Head coach Terry Holbert also coaches basketball and baseball at the school. He was the team’s offensive coordinator last year so he is familiar with the personnel.

Goober tries to help man in trouble with angry bear

I was drivin’ on a country road the other day and I sees this man. I offers him a ride... read more