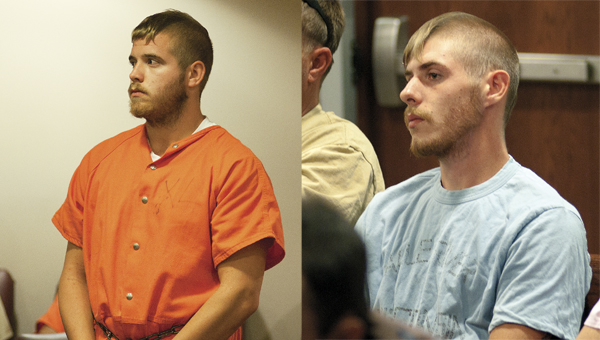 Holding hands and surrounded by supporters, the couple whose two dogs were brutally slaughtered Saturday saw the suspects at their first court appearance since the incident.

Bond was set and attorneys were appointed for both Brian L. Sharp, 20, of 339 Township Road 324, and Johnathan D. Jiles, 20, of 27 Private Drive 380, both of Pedro, at their arraignment Thursday in Ironton Municipal Court.

The two men allegedly stabbed and slit the throats of a lab-basset hound mix and a coonhound early Saturday morning at the home of Josie and Mike Scythes. The Scythes found their pets dead later that morning.

During the arraignment, Sharp said he could not afford an attorney and did not want the court to appoint him one.

Judge O. Clark Collins asked the man if he understood the charges and recommended he take court-appointed counsel.

“Do you understand the seriousness of the charges?” Collins asked. “… I’d rather appoint you an attorney. These are very serious charges you are facing.”

“Due to the brutal nature of this offense, we have two animals that were confined on their own property … brutally mutilated for no apparent motive,” Anderson said. “… Even though these are misdemeanor charges, the community is outraged by this, as well as the prosecutor’s office.”

After the hearing, the Scythes said they were glad both men had been arrested. Josie Scythes said she was scared until the second man, Jiles, was arrested Wednesday.

“(It was) miserable,” she said. “Not knowing where the other person is and what they are going to do next.”

Mike Scythes said he was satisfied with the $30,000 bond set for both men.

The couple said they want the men to be punished to the fullest extent of the law.

“I can’t really mourn until I know they get the fullest penalty for this,” Josie Scythes said.

Lawrence County Sheriff Jeff Lawless said both Sharp and Jiles claimed to be drunk at the time of the incident and did not target the Scythes family.

Both men live in the vicinity of the Scythes family.

A laundry list of improvements that would make the Lawrence County Jail meet state compliance range from more space for... read more