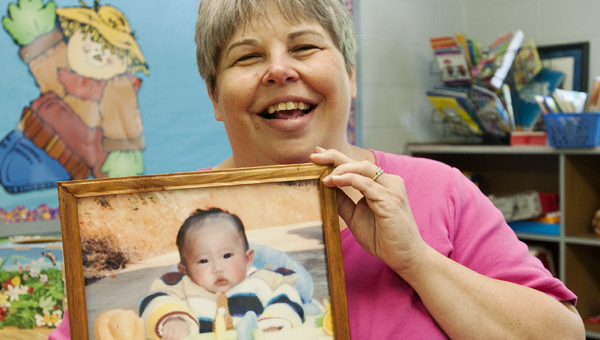 Sugar Creek Christian Academy kindergarten teacher Sherri Pack, of Pedro, shows off a photograph of a baby girl she will be adopting in the coming months.

PEDRO — Sometimes the waiting really is the hardest part.

The two decided to adopt a baby girl from China and are about two or three months away from making the journey to pick her up.

“We just had a heart for this child,” Sherri, kindergarten teacher at Sugar Creek Christian Academy, said. “A child that was just thrown into an orphanage because she was the wrong gender.”

The baby girl they will adopt is about 1 year old, but they have been trying to adopt a child for the past six years.

Sherri said the adoption process typically takes about nine months. But after filing paper work and getting background checks, the Chinese agency stopped making weekly referrals for adoptions, putting the Packs on a six-year waiting list.

Sherri admitted she and her husband thought they might never hear from the agency.

“We had tried and waited for so long, but we just couldn’t take our name off the list,” she said.

About a year ago, little Lurui was born and left at the front gates of a Chinese orphanage. Soon after, the Packs were contacted that it was their turn to adopt.

“We’ve been waiting on God,” Sherri said. “We hoped he had a child for us. Everything is in God’s time.”

The couple has named the baby Shelby Lurui, keeping her Chinese name.

“We want to give her the opportunity to keep her culture,” Sherri said.

Since the Packs planned for the adoption six years ago, Sherri said the two are not prepared financially to cover the costly process.

But since the word has gotten out about the adoption coming through, the community has come together to help support the family.

“A lot of parents here, and students, have been so encouraging,” Sherri said. “Some of them have been waiting six years too.”

Sherri also said her their church, Freedom Baptist, has also helped and encouraged the couple.

An anonymous donor sent $2,000 to the Packs’ adoption agency.

To help with costs, friends have organized a rummage sale, bake sale and car wash at the Sparetime parking lot on Saturday.

Rax Restaurant and Sparetime have also offered to help the Packs.

On the day of the event, for anyone who brings in The Tribune article, Rax will donate 10 percent of the sale to the Packs. At Sparetime, showing the article will earn the Packs $1 per game.

“It makes me feel very tiny in a way,” Sherri said. “It amazes me there is so much love.”