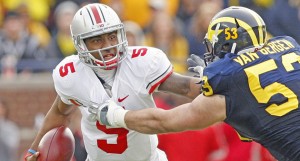 “I just want guys to play fast,” he says.

So in his first season at Ohio State, he has instituted warmups, drills and practice procedures all built around the central tenet of, well, hurrying. He has said he doesn’t care so much if a player does something wrong so long as they do it quickly.

The message has soaked in, and it carries over from a fast-paced world: Don’t dawdle.

For a generation raised on 140-character summations and rapid Google searches, it’s only natural that optimizing your time in football means packing as much as possible into a short period.

“We’re very impatient,” Luke Fickell said, sounding more like a sociologist than a defensive coordinator. “So when things are happening fast, it’s almost like these guys are used to that. Everything is instant nowadays. So I think they enjoy the up-tempo practice. It adds a little bit more excitement.”

And what the 18th-ranked Buckeyes do in practice they hope carries over to games, such as their opener on Saturday against Miami (Ohio).

Meyer preaches that he wants everyone’s body clocks set to a span of 4 to 6 seconds of full-bore activity. He wants his offense to run so many plays so quickly that defenses either don’t have time to make adjustments or break down from the incredible pace.

“Coach Meyer has that motto, ‘Practice hard so the games are easy,”’ defensive lineman Michael Bennett said. “He’s doing that. Everything’s really fast. You don’t get a rest. So that when the game comes, the 8 seconds in between each play, you’re just loving it.”

So, is this a track squad, a football team or a game of musical chairs? Truth be told, it’s all of those things.

Meyer has been critical of his receivers and backs since the first day of practice because they don’t show the breakneck speed, versatility and athleticism he was used to during his time as coach at Florida. The SEC, winner of the last six national championships, is the acknowledged capital of sprinters in shoulder pads.

“There’s some fast times that our (players were timed at) this year. Like, fast times. (But) they don’t play real fast,” Meyer groused midway through fall workouts. “So our job as coaches is to get them to play fast. I think there’s enough here that I hope to get wowed a little bit.”

It started with his offense. The defense has had to adapt to keep up. Now opposing teams will have to follow suit.

“Once the offense becomes second nature, the whole game slows down and the tempo doesn’t seem near as fast for the guys who are doing it,” offensive coordinator Tom Herman said.

Even the massive, meaty linemen have gotten into the rhythm of things.

“I felt like, in the spring, when we were scrimmaging, we got into that seventh or eighth play of the drive the defensive line was, like, ‘Oh, man!’ They’d never seen something like that, players like us going as fast as we can, getting the play off as fast as we can,” said center Corey Linsley, hardly a scatback at 6-foot-3 and 295 pounds. “It’s a huge advantage.”

So much for the dog days of practice. There’s been no respite from the unrelenting pace.

“They’re going in a jet,” cornerback Doran Grant said of the offense. “Fast. Playing downhill running, passing. You’ve got to be on your toes.”

Defenders can just about forget catching their breath.

“There’s no time for you to walk back to the huddle,” safety Orhian Johnson said. “We have to get set up and get ready for the next play because you never know when Coach (Meyer) is going to get that ball snapped.”

The hurry-up philosophy carries over to even the skill positions, usually the domain of precise footwork and timing.

“It’s quick reads, get the ball out of my hands and get the ball into playmakers’ hands,” quarterback Braxton Miller said.

The benefits are many: conditioning, stamina, ball control and another way to enforce your will on the opposing team.

No wonder the Buckeyes advise fans coming to Ohio Stadium to save their restroom and concession trips until halftime. Leave your seat at your own peril, they say, or you just might miss a 70-yard touchdown. Or a dozen other plays.

“They will definitely see more explosive plays and up-tempo offense: quick, scoring quick, getting down the field in a hurry,” running back Carlos Hyde said. “Just more excitement.”

CHARLESTON, W.Va. (AP) — For quarterback Geno Smith, the temptation might be to watch West Virginia’s pounding of Clemson in... read more