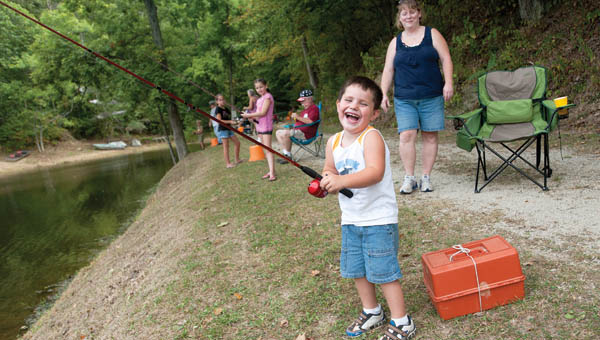 Four-year-old Noah Clifton breaks out in laughter, while mother Ruthie watches, as he attempts to cast his fishing line into the water.

Ten minutes into the morning and 9-year-old Blake Wicker of Ironton had already snagged the first catch of the day — a four-ounce rock bass.

Hauling his prize up to the weigh station in an orange plastic bucket, Blake relied on his uncle Shaun Clark, to pull out the wiggly bass squirming around in the algae-coated water.

“I’m happy,” Blake said about the catch that he had reeled in with some night crawlers.

Then he promptly poured the contents of the bucket back into the lake.

The annual Labor Day weekend fishing derby hosted by the Izaak Walton League Association was off to promising start.

Soon after that Shay Holtzapfel marched up with her bucket to find out she had pulled in a six-ounce blue gill.

About 100 would-be anglers took their places around the lake Saturday morning for the catch-and-release event as an easy wind rippled the surface, sending orange bobbers dancing.

Down the lake Richard Kelley of Ironton was giving sons, Mike, 5, and Richie, 6, their first lessons.

Sometimes he cast for them. Sometimes he coaxed them to have a bit more patience and to remember always the worms are for the fish, not for playing with.

For the organizers of the derby, Mike, Richie, Shay and Blake were the reasons for the day.

“This is to get the kids involved,” Chuck Self, of the Walton League, said. “We’re getting old. Things need to be taken care of.”

The manmade lake off County Road 4 has been the site of membership-only fishing since the 1950s. Stocked once or twice a year with bass, crappie, catfish, bluegill, rock bass and carp, the lake offers a postcard view of blue water framed by sweeping trees and rock walls.

Self was 4 when he caught his first fish.

“It was right out of this place,” he said. “A seven pound bass. It was unbelievable.”

Everett Taylor of Pedro understands Self’s enthusiasm. He has been fishing since he was 12.

“It is a game of patience,” Taylor said. “When you do get a fish, the adrenalin pushes through you.”

Right now there are approximately 80 members of the league who can fish anytime throughout the year, as long as they are willing to brave the elements. Dues are $87.50 a year for a family and $67.50 for individuals. Members can also hunt the acreage around the lake and camp out nearby.

“It’s a wonderful lake,” Self said.

PROCTORVILLE — Honoring first responders is the reason behind the Fourth Annual 9/11 Service Person Appreciation Day, sponsored by the... read more