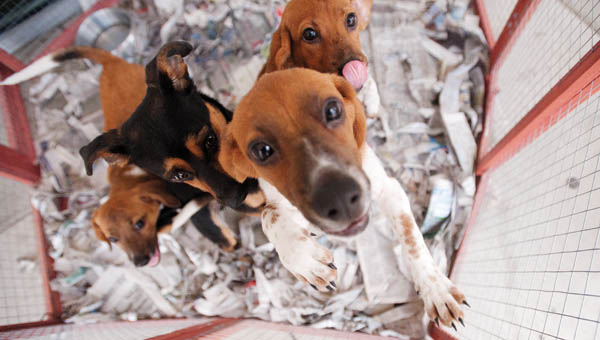 A litter of puppies become excited during the Adopt-A-Pet event Friday at Petland in South Point. Sponsored by the Lawrence County Dog Pound, residents came, held, snuggled, bonded and maybe even went home with a new member of their family.

SOUTH POINT — The tiny ball of fur didn’t have a name yet, but the young pup was in loving arms Friday at the Adopt-A-Pet event at the South Point Petland.

The children had arrived at Petland with their mother, Kristi Smoot, with the intension of getting a more aquatic species.

“We came to look at fish and we saw this going on,” Smoot said.

The Lawrence County Dog Pound and Petland teamed up Friday to show off some dogs and cats in need of good homes outside the storefront.

Williams was hopeful the county dog pound would be able to have events monthly at the store.

“Anything to help the community and help the animals get a home,” Williams said. “That’s what is needed most.”

Dog Warden Bill Click dropped off more puppies at the event, one of which Camryn and Evan chose.

Click said he was pleased with the turn out for the adoption event. He also noted about 15 other animals were adopted out from the shelter last week.

“You don’t know what this means to us,” Click said. “We’ve seen so many animals put to sleep over the years.”

The warden also praised Petland for its continued support in selling dogs tags and donating pet food to the shelter.

Click said more adoption events are in the works, including one tentatively set for mid-September at the South Point Tractor Supply. He also said the events are more than a one-man operation — volunteers are needed.

Missy Coburn and Nellie Noll helped out at Friday’s event. Click said anyone interested in volunteering at an adoption event can email him at lawcowarden@gmail.com for more information.

“They’ve got to love animals,” Click said of potential helpers. “That’s all we care. We’ll teach them the rest.”

As for Camryn and Evan’s new pup, sleeping arrangements will now be the new hot topic of conversation.