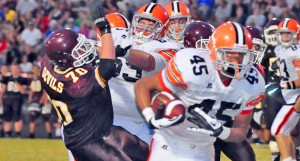 When the Ironton Fighting Tigers host the Gallipolis Blue Devils on Friday, there won’t be many surprises.

Ironton head coach Mark Vass said this year’s version of the Blue Devils looks very similar to teams in the past.

“They’re a typical Gallipolis team. They have some size and they have some good athletes,” said Vass. “They’ve been able to move the ball well the first two games and put points on the board. We’re going to have to play well defensively.”

Gallioplis is 1-1 after beating Athens on the road in their opener and falling 21-7 last week to Licking Heights in a game closer than the final score.

The plethora of athletes in the Gallipolis offense is led by junior quarterback Wade Jarrell (6-0, 160).

“(Jarrell) is a good athlete. If you put pressure on him, he can turn busted plays in to big plays,” said Vass. “They have good backs who have some speed and they run hard.”

The Blue Devils racked up 505 total yards against Athens with 320 coming on the ground. The defense held Athens to 93 yards rushing on 26 carries.

Jarrell spreads the ball around. He has completed passes to seven different receivers with Nick Clagg (5-9, 165) and Allison catching four each and Eastman three.

“They have some good size up front and they move pretty well,” said Vass.

Defensively the Blue Devils use a 4-4 alignment that will adjust to Ironton’s formations.

The outside linebackers are Justin Bailey (6-0, 175) on one side with Allison and Pullin on the right side. Inside are Warnimont and Mark Allen (5-9, 185).

Eastman and Clagg are the corners with Russell the free safety.

“They’re very aggressive on defense. They like to attack and come after you. We’ll have to be ready for anything they throw at us,” said Vass.

The game will mark the final meeting in the series, at least for now. Gallipolis has elected to drop the series and play Fairland next season.

CINCINNATI (AP) — Jay Bruce is back to reacting to pitches instead of thinking about what’s coming. And when he... read more