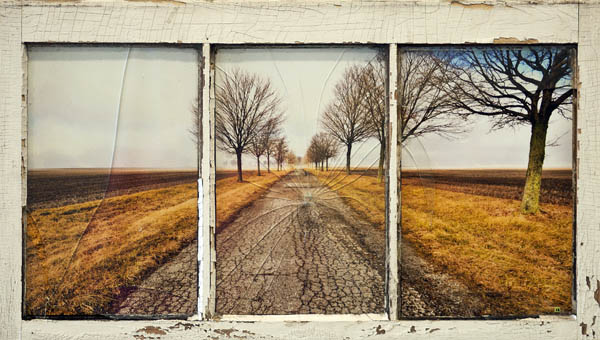 “Out the…” by Tiffany L. Hixon, currently on display at Ohio University Southern Proctorville Center.

PROCTORVILLE — Journeying the off-the-beaten path is the best way photographer and visual artist Tiffany Hixon has found to find the subjects she wants her camera to explore.

Hixon’s unique eye on the everyday is showcased at the current exhibit at Ohio University Southern Proctorville Center featuring 30 of her photographs taken over the past year.

Basically self-taught, Hixon, an Ironton native, explores her world with a Nikon D500 starting with the time she checked out an abandoned house overlooking the Ohio River on the Kentucky side.

“It had been burned away and I was always curious about what it looked like,” she said. “I went up and started taking pictures.”

In her artist’s statement for the show, Hixon says she uses her camera as a way to take away the curtain from what society labels repulsive.

“Most people would look at a dead bird and see disgust,” she writes. “I look at it and see the beauty of life and the result of living that life. Death, be it literally or metaphorically, isn’t always ugly.”

This attraction to what many find unattractive has been a characteristic of Hixon, she says, since she was a child.

“It is kind of like how kids always get the puppy that is hiding in the corner, the runt of the litter,” she said. “I was drawn to those. As an adult, it’s the places that are forgotten that are the ones with the greatest story to tell. It is amazing to go into them and see their history. But you have to dig for it.”

And sometimes the photograph just comes to the artist. Like the shot she took exploring the abandoned home of William Tarr, a prominent 19th Century distiller in Bourbon County, Ky., now a ruin and an eyesore.

“From the den, the room lined with book shelves, an amazing light was coming from upstairs in a corner,” she said. “The light was shining, staring down into the chair like he was there and cast a purple glow in the whole room.”

Right now Hixon is an art major at OUS and has already racked up honors for her photography including a second place and purchase award for works submitted for the Foothills Art Festival hosted by the Southern Hills Art Council and finalist in the Photographer’s Forum magazine college photography contest hosted by Nikon.

“I want people to be able to see places they don’t normally notice,” she said. “It is more about slowing down. You get to slow down and see those things in the photos and get to hear the stories.”

PROCTORVILLE — The memorial behind the VFW 6878 Post Home is providing an additional way for veterans to be honored.... read more