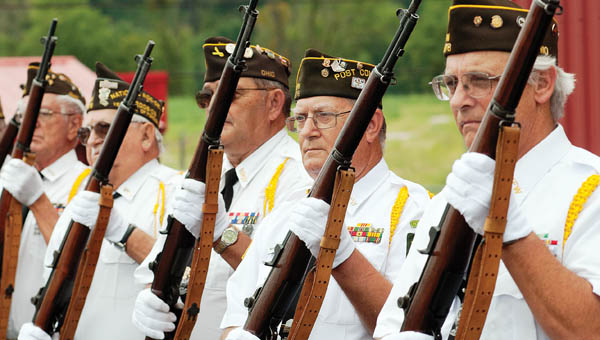 That was the point of an observance Saturday at the Lawrence County Fairgrounds.

The annual Service Person Appreciation Day, organized by the Proctorville branch of Wesbanco, was meant to honor not only those braves souls who responded to the Sept. 11 attacks but also to those men and women who serve this community today, branch manager Denise Miller explained.

“We started this as a flag raising when we opened the branch 11 years ago but the last four years, we’ve made it a tribute to 9/11,” Miller said. “These people (emergency service responders) don’t get enough thanks and we want to show our appreciation.”

The Girl Scout Troop 980 of Proctorville, under the leadership of Janel Kiritsy, demonstrated the proper way to fold a flag as VFW Post 6878 member John Weber explained why the flag is folded in a certain way and what each fold symbolizes. The VFW Post 6878 Honor Guard gave a 21-gun salute. The National Anthem was sung and the Pledge of Allegiance recited.

The post’s Chaplain Earnest Earl said, the ceremony was meant to bring people together and remind people of how much they we need each other. In his prayer, he prayed that, “ We can’t understand a lot of things going on,” but that today and every day is a moment to let the world know there are people who still love America.”

Few can forget the Sept. 11, 2001, photographs and video footage of New York City. There firefighters and other emergency... read more