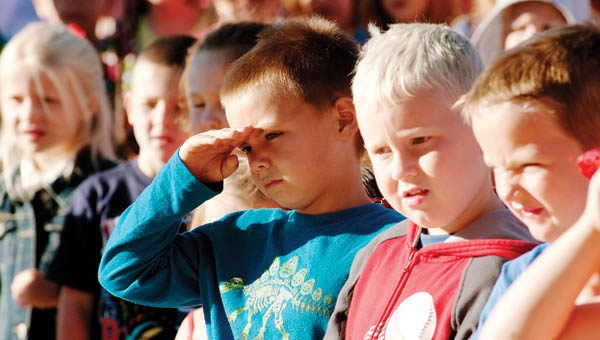 Students gather in front of Dawson-Bryant Elementary School early Tuesday as they take part in a Patriot Day ceremony.

DEERING — Everyone can remember what they were doing or where they were when hijacked jetliners crashed into the World Trade Center towers in 2001.

That is, unless, they were not yet born.

Tuesday, Dawson-Bryant Elementary School students gathered outside the school to pay tribute to those lost in the attack and to focus on patriotism. The majority of the students were not even born when the attack happened, and some were still in diapers.

Principal Angie Dillow said they explained the event to the students, but focused on the day as Patriot Day and what it means to be a good citizen.

“Our patriotism has pulled us together many times,” Dillow told the students, and encouraged them to show their pride for country.

“When you stand still and be quiet during the National Anthem, that shows you’re proud of your country,” she said.

Dillow also reminded the students to always say thank you always to veterans and to help keep their school clean to show pride.

McClain said it is important for the children to know this history of their country and the attack on American soil, to know about the sacrifices that were made and to be in touch with veterans.

“It’s time we start teaching out kids so we don’t have another Vietnam era,” Jordan said.

“Freedom is not free,” he added.

When it meets Thursday, Ironton City Council is expected to give second reading to an ordinance entering into an agreement... read more