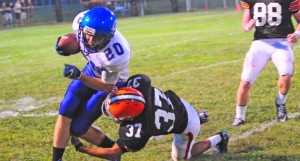 Ironton escaped last week. The Fighting Tigers may just have to try and survive this week.

Although Ironton and the Ashland Tomcats are both unbeaten, there is a lot more concern in the Fighting Tigers’ camp.

Head coach Mark Vass said the Tomcats (4-0) have not only been rolling up the points on offense, but their defense has been smothering.

“When you look at their team, you don’t see a lot of weaknesses. We’ve had three tough games and this will be the best team we’ve faced,” said Vass. “They’ve got a lot of weapons on offense, they are aggressive on defense and they have some nice linemen to go with their skilled players. They’re the real deal.”

Ashland’s defense has allowed 20 or fewer points in the past 16 regular season games including a 28-6 win over Ironton last season.

The Tomcats refer to every week as shark week, stealing a page from the 1974-75 teams who boasted the JAWS defense.

Last week, Ashland rolled past Russell 47-7 and the Red Devils’ touchdown came late in the game against the second unit. Russell punted nine times and was stopped for no gain or negative yardage on 14 plays.

One of the key players on the offensive side for Ashland is freshman running back Quenton Baker (5-11, 160) who had 227 yards and three touchdowns against Russell.

“He’s been putting up good numbers every week,” said Vass.

Elam — who originally lived in Ironton when his father, John, was mayor — gives the Tomcats a quarterback who can run or thrown.

“Elam isn’t the same type of player as (Sam) Hunter last year, but he’s pretty good and he’s bigger and stronger. He’s a load to bring down,” said Vass.

Luke Johnson (6-0, 245) takes over at center for Drew Walters who reportedly broke his ankle last week.

O’Bryan leads the defense at the left end spot but will move around to different spots. The other end is Johnson with Luke Johnson (6-0, 245) and Ellis the tackles.

Ironton leads the series 40-33-3 but Ashland has won two of the last three meetings.

Reds trying to get top seed