What’s in that box? 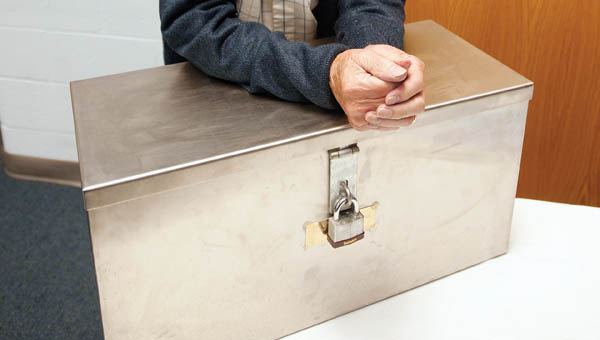 Ray Howard is seen pictured with the time capsule box that he helped create at the Ironton Briggs Lawrence County Public Library.

The box looks ordinary: it is roughly two and a half feet long, 18 inches high and a foot wide. It’s sturdy, metal with a lock on it.

But 25 years ago treasures were put into that box; Monday, will be discussed what those treasures are.

On Sept. 17, 1987, a time capsule was filled with mementos in celebration of the 200th anniversary of the Northwest Territory and the subsequent creation of Ohio and several other Midwestern states.

During the Bicentennial year, there were celebrations throughout Ohio in honor of the historic event. Locally, a 17-member committee was formed to fill a time capsule that was to be opened in 25 years. That time limit ends Monday.

The committee and the staff at the Briggs Lawrence County Public Library main branch, which has kept the time capsule for the last two-and-a-half decades, will open the box during a ceremony at 6:30 p.m. in the conference room near the Hamner Genealogy Room.

Becky Sanborn, who was one of the younger members of the time capsule committee, will likely find the stash of historic items as fresh and new as people who weren’t even born in 1987.

“I can’t remember what I put into it,” Sanborn said.

Committee Chairman Ray Howard does remember some of his contributions but there was a bit of a mischievous twinkle in his eye when he told other committee members at a ceremony planning meeting Monday, “I remember some of the things, I’m not telling.”

Library Director Joe Jenkins said the time capsule has been kept in the Hamner Room except when the library was being renovated. Then it was stashed in his office for safekeeping, locked and waiting for Sept. 17, 2012.

“I’m glad I didn’t have a key,” Jenkins said. He was not a member of the committee and has no idea what’s in that locked metal box. “I might’ve been tempted to peek.”

SOUTH POINT — By Monday Lowell Moon was cutting down the sugar cane in about an acre patch getting ready... read more