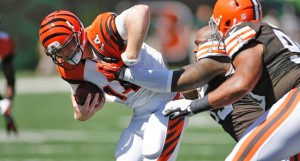 CINCINNATI (AP) — The onside kick tumbled one last time, right into the arms of A.J. Green. Cincinnati’s Pro Bowl receiver pulled it close and covered it up, a modest finish to a game full of wild plays.

It provided a familiar ending, too.

Adam “Pacman” Jones returned Cleveland’s first punt 81 yards for a touchdown on Sunday, and Andy Dalton tied his career high with three touchdown passes, leading the Bengals to a 34-27 victory in their one-sided rivalry.

The Bengals (1-1) have won 13 of the past 16 against the Browns (0-2), who got breakout performances from their rookie quarterback and running back but still couldn’t get a win.

“It’s a relief,” Green said. “We had butterflies. We felt like we needed this one. Now we can just relax and go back to playing.”

Like a lot of games in the intrastate series, this one came down to merely holding on.

Cleveland quarterback Brandon Weeden threw for 322 yards and a pair of touchdowns, rebounding from one of the worst debuts in NFL history — four interceptions against the Eagles and a 5.1 passer rating.

Trent Richardson became the first Browns rookie to run for 100 yards and score on a run and a pass in the same game, according to STATS LLC. The big day wasn’t enough to stop Cleveland from falling to 0-2 for the fifth time in the past seven seasons.

“We’re getting there,” Weeden said. “The running game definitely takes a lot of pressure off of me. It helps when you run the ball.”

Cincinnati improved to 42-36 in the 44-year series, the biggest lead by either team.

The Browns had linebacker Scott Fujita back after his three-game bounty suspension was overturned on appeal. Cleveland missed top cornerback Joe Haden, who served the first week of his four-game suspension for violating the league’s policy on performance-enhancing substances. Cornerback Sheldon Brown also was out of the lineup with a shoulder injury.

Dalton took advantage of the depleted secondary by completing 24 of 31 for 318 yards with six sacks and an interception. Andrew Hawkins turned a short catch into a 50-yard touchdown in the fourth quarter that kept Cincinnati in control.

Dalton also threw a 10-yard touchdown pass to Green and a 44-yarder to Brandon Tate, using all of his receivers.

“We’ve been saying all along that we’ve got a lot of guys with talent,” Dalton said. “It was great getting them into the game and seeing them make the plays that they did.”

The Bengals’ defense got shredded during a 44-13 loss in Baltimore on Monday night that matched the most lopsided opening defeat in franchise history. They let Weeden get some confidence and allowed Richardson to slip through their fingers, keeping it close.

“We gave up some big plays,” middle linebacker Rey Maualuga said. “Overall, we did a pretty good job. Based on the score, it might not seem like we did.”

Cleveland managed only 210 yards in the opening 17-16 loss to Philadelphia. The Browns piled up 439 on Cincinnati.

“I had a big stat day and it was a much better game for me,” said Richardson, who had knee surgery on Aug. 9 that wiped out most of his training camp. “I wouldn’t call it a complete game. It’s coming along. We did a good job, but I think we can be even better.”

Phil Dawson’s 25-yard field goal with 20 seconds left cut the lead to 34-27, but Green recovered the onside kick to seal it.

Jones put Cincinnati ahead to stay by slipping away from three Browns and avoiding two others during his fifth career touchdown off a punt return and his first since 2003. He celebrated by jumping and wrapping himself around the padding on the goal post, holding on tightly for several seconds.

Weeden settled down with quick, short throws in the second quarter. Richardson, the third overall pick, ran 32 yards for Cleveland’s first touchdown on offense this season.

Dalton made one mistake that kept Cleveland in the game. He sailed a pass that got tipped to linebacker D’Qwell Jackson at midfield late in the third quarter. Weeden threw a short pass to Richardson, who slipped through several tackles on his way to a 23-yard touchdown that cut it to 24-17.

NOTES: The Browns had 10 penalties for 103 yards, including a personal foul for unnecessary roughness on Jackson. … In three career games against Cleveland, Dalton is 55 of 77 (71 percent) for 669 yards with five TDs, one interception and a 114 passer rating. … The Bengals gave up 20 plays of 10 or more yards in the loss to Baltimore, 17 such plays against Cleveland.

MIAMI (AP) — The Cincinnati Reds tied a season high with 17 hits and it was their final one that... read more