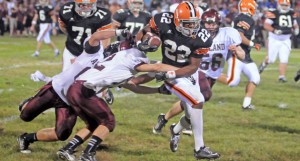 Ironton Fighting Tigers’ running back Patrick Lewis (22) sheds an Ashland defender on his way to a 53-yard touchdown run at the end of the first half. Lewis had 261 yards and three touchdowns as Ironton beat Ashland 27-17. (Kent Sanborn of Southern Ohio Sports Photos)

In what looked like a battle of dueling banjos, it become more of an orchestra for the Ironton Fighting Tigers.

“They loaded up the box and when (Lewis) has a seam, he can break out of there. He did it again. That’s four games in a row,” said Ironton coach Mark Vass.

“He’s stepping up when we need him. He made the big plays. The Baker kid is good. Our guy is a senior. We have to see (Baker) three more years.”

The difference was Ironton’s defense and its ability to stop the Tomcats on third down.

Ashland caught a break when Ironton’s opening drive stalled at the 41 and the punt went for a minus 6 yards.

Although Evan Yongue ran for 12 yards on the first play for Ashland, the next three plays came up short of the first down and Dylan Patrick kicked a 31-yard field goal for a 3-0 lead.

Ironton punted on its next two possessions and forced an Ashland punt with 2:01 left in the half.

Lewis had a 30-yard run to help get the ball out to the 48, and two plays later he got loose on a 53-yard scoring run. Jalen Schweickart’s conversion kick put Ironton up 7-3 with just 25 seconds left in the half.

“It’s all about the blocking. Our line gets the credit. Without them I go nowhere,” said Lewis.

Ashland’s Malik Massey returned the second half kickoff 56 yards to the Ironton 30.

The Tomcats got a break and converted a third down play when quarterback Aaron Elam was hit by two Ironton linemen and threw the ball up for grabs as he was falling backwards. C.J. Johnson came up with the catch and a 6-yard gain for the first down.

Ironton got the ball back at the end of the third quarter at its own 17 and quarterback Tanner Dutey ran for 5 yards as the quarter ended.

Trevor White ran for 3 yards but a penalty backed Ironton up 5 yards. With the Tomcats jamming the line of scrimmage, Lewis broke out of the pack and went 70 yards for the touchdown that gave Ironton the lead for good.

Schweickart kicked the extra point but Ashland was offside and Ironton was forced to kick again. The snap was fumble and it was 13-10.

Ashland got to the Ironton 25, but back-to-back sacks by White and Maurice Phillips made it third and 20. Logan Salow threw an end around pass back to Elam for 13 yards but a fourth down pass went incomplete.

Taking over at their own 22, Ironton moved out to the 39 and then Lewis bounced around left end, broke into the secondary and ran for the touchdown and a 20-10 lead with 5:28 left.

“It was open and I took a shot and bounced it outside,” said Lewis.

The Tomcats tried to mount a scoring drive, but a sack by Phillips cost the Tomcats 10 yards and on the next play Dutey came up with an interception at the 26 and returned it 74 yards for the clinching touchdown.

“We went from 3-deep to 4-deep so I could cheat a little. I just jumped the underneath route and my guys did the rest leading the way. I didn’t have to do much,” said Dutey.

Yongue’s 13-yard run with 1:02 left drew Ashland within 27-17, but Ironton recovered the onside kickoff and Dutey took a knee twice to end the game.

Ironton plays at Portsmouth next Friday.

COLUMBUS (AP) — After another game too close for comfort, the overriding emotion for Ohio State coach Urban Meyer was... read more