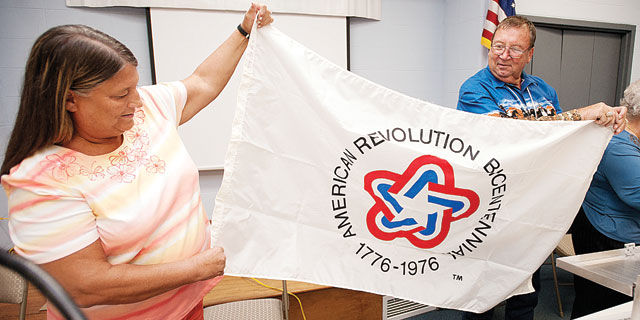 Becky Sanborn, left, and Richard Gillenwater, right, display an American Revolution Bicentennial flag taken from a time capsule created back in 1987. On Monday former committee members of the Northwest Territory bicentennial Celebration Time Capsule gathered to review some history as they take out items such as newspaper clipping, letters, a cookbook and much more.

Christian Hicks was born in 2001, 14 years after Lawrence County celebrated the 200th birthday of the signing of the Northwest Ordinance.

So it was understandable he might have been just a little curious about what was inside that rectangular metal box near the front of the room at the Briggs Lawrence County Public Library conference room.

By the end of the evening Monday, after the contents of that box were revealed, Hicks pronounced himself satisfied.

“I think its pretty cool,” he said.

The box was a time capsule that was assembled in 1987, the year the state celebrated the bicentennial of the signing of the Northwest Ordinance, the document that provided the means for Ohio’s eventual statehood.

When the time capsule was assembled, the committee in charge of it agreed to store it in the library’s main branch on South Fourth Street and open it in 25 years. Those years came to a close in front of a small, but fascinated, crowd that gathered to see what had been put in the box.

“We make history every day,” time capsule committee chairman Ray Howard told the assembly. “History is very important. There should have been three times as many people here as there are.”

To his fellow committee members, Howard told them as the box was opened, “There are going to be some things in there you probably forgot.”

One by one, yesteryear’s treasures were brought out: an Ironton City Directory from 1983. A calendar from Hecla Water Company. A letter from then-President Ronald Reagan commending the committee for assembling the time capsule and celebrating the ordinance’s bicentennial in other ways. A library card. A pocket calculator. In a nod to the time, the Lawrence County Historical Society had offered a cassette tape. A videotape of the Bicentennial Wagon Train earlier that year, one of many ways Lawrence County celebrated the historic event, was also included.

In all, several dozens items were removed from the time capsule.

“I’m impressed with all the things they got together,” historical society member Fondalene Alfrey said.

Ironton men cooking for good cause

Ironton residents Shawn Jones and Jay Zornes have taken their love of cooking, particularly BBQ, and decided to use their... read more