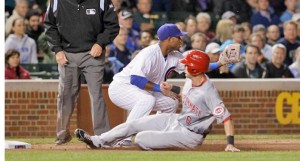 Cincinnati Reds’ Drew Stubbs (6) slides safely into third base during Wednesday’s game at Chicago. Stubbs had three hits and drove in the winning run as the Reds beat the Cubs 6-5 in 11 innings. (Photo Courtesy of The Cincinnati Reds)

CHICAGO (AP) — On the brink of clinching a playoff spot, Brandon Phillips was missing his manager on Wednesday night.

Drew Stubbs hit a tiebreaking RBI single in the 11th inning and Cincinnati beat the Chicago Cubs 6-5 without Dusty Baker, who was diagnosed with an irregular heartbeat.

Baker left the team before the game to undergo chest X-rays that were intended to rule out pneumonia. Bench coach Chris Speier brought the lineup card to home plate and there was no sign of the 63-year-old Baker during the game.

“I guess the good thing is it’s not pneumonia, but the bad thing he has an irregular heartbeat, so basically they will over keep him over at the hospital and run some more tests in the morning before he is set free,” Reds head trainer Paul Lessard said.

Baker will not be with the team on Thursday and his return is uncertain.

Phillips’ lazy popup with two out in the 11th on a windy night at Wrigley Field was misplayed by Cubs right fielder David DeJesus, allowing him to reach second. Stubbs then smoked a run-scoring single to left against Alberto Cabrera (0-1).

“I had to worry about my daddy,” Phillips said. “I can’t have daddy pass out on us. We can’t let that happen. I am glad he is all right. He is going to be in my prayers when I get back to the hotel. Before I go to sleep make sure I say some prayers for him and family also. Hopefully I miss him because I miss him, I miss him and the toothpicks and the wristbands, I miss it all.”

Speier said he talked to Baker.

“He sounded good and they are just doing their due diligence, just running some tests,” Speier said. “He will be back shortly.”

Logan Ondrusek (5-2) worked out of a bases-loaded jam in the 10th to earn the win. Jonathan Broxton earned his fourth save in six chances since joining Cincinnati in July.

Joey Votto reached four times and drove in three runs for the Reds (90-59), who have won three straight to become the second team in the majors to reach 90 wins. Cincinnati also moved a season-high 31 games over .500.

Alfonso Soriano hit his 30th homer for Chicago, which trailed 5-1 after five innings.

Cincinnati lowered its magic number to clinch a playoff spot to one with the Los Angeles Dodgers splitting a doubleheader at Washington. The Reds’ magic number for a second NL Central title in three years is three.

The Reds used five straight singles to score three times in the third. Votto drove in a pair with a bases-loaded single to left and Ryan Ludwick singled in Stubbs to make it 4-0.

Votto also doubled in a run in the first.

Reds starter Mike Leake retired his first 11 batters before Anthony Rizzo’s two-out single in the fourth. After a walk to Soriano, Starlin Castro singled in Rizzo.

Soriano hit a long two-run drive onto Waveland in the sixth inning, giving him six career 30-homer seasons, including two with the Cubs. He now has 103 RBIs, one short of matching his career high.

“He did it in style,” Cubs manager Dale Sveum said. “That ball went walking out of there. I think that was going out regardless of wind.”

Castro followed with a two-out single and scored on Luis Valbuena’s double down the left-field line, trimming the Reds’ lead to 5-4. Leake then caught a lackadaisical Valbuena wandering off of second base to end the inning.

The pesky Cubs rallied with two outs in the eighth against J.J. Hoover, who walked three batters — including one that forced in the tying run.

Cubs starter Chris Rusin was tagged for five runs and 10 hits in five innings. The 25-year-old had given up just three runs and nine hits over his last two starts — both of which also lasted five innings.

NOTES: Ludwick was taken out for precautionary reasons in the fifth inning due to left groin tightness. … Reds LHP Aroldis Chapman said his fatigued left shoulder “feels good” after throwing a bullpen session. Chapman said through an interpreter that he likely needs two or three more bullpens to work on his command. … The Cubs agreed to a new player development contract with nearby Class-A Kane County. The contract runs through 2014. … Chicago sends Jason Berken (0-1, 7.20 ERA) to the hill in the series finale Thursday against Johnny Cueto (17-9, 2.92). … Soriano didn’t hit his first home run of the year until May 15. It’s his first season with at least 30 homers and 100 RBIs since 2005.

Jim Walker jim.walker@irontontribune.com Coal Grove at Bishop Ready The Hornets (1-2) let this one get away last year and will... read more