Giveaway back for second year 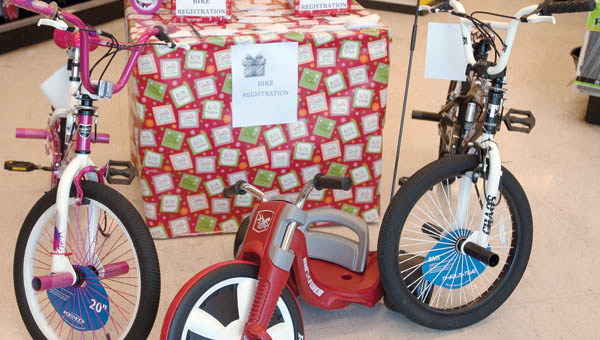 A stand featuring both a girl’s and boy’s bike and a toddler’s tricycle is on display at Advance Auto Parts for the yearly Christmas time drawing.

The leaves have barely started to turn from green to golden, and already some local businesses are looking forward to spreading Christmas cheer.

Thanks to support from the community and the folks at Advance Auto Parts and Dickess Auto Repair in Ironton, more than 30 children received brand new bicycles last Christmas.

Advance started the idea with just two bikes and a raffle box. Dickess joined in with two more bikes and within a week’s time, the community grew the giveaway to a size greater than organizers expected for the inaugural event.

Names were drawn and the bikes were given out at the packed Advance store.

“I can still see some of those kids’ faces,” said John Dickess, owner of the auto repair shop.

This year, Dickess and Advance manager Don Schwartz hope to put smiles on more than three times as many children’s faces.

With their sights set on 100 bikes, Dickess said he feels confident the feat can be met.

“Last month, people started calling and stopping by (wanting help),” he said of folks who were eager to help.

So far, about $1,700 has been donated to purchase bikes. The two stores have already bought 18 bikes and preordered 70 more from the Ashland, Ky., Walmart.

Dickess said the Walmart also donated a bike and gave discounts on others.

This week, the raffle boxes were put out at Advance, ready to take the names of boys and girls in need of their own mode of transportation.

This year the event will be different from last year, Schwartz said 50 names would be drawn from the raffle boxes and 50 bikes would be divided amongst the county’s school districts.

Also, anyone who wants to donate a bicycle or money to purchase a bike will have the opportunity to present that bike to a child, face to face.

“We wanted them to see what it feels like to give a child a bike,” Dickess said. “We enjoyed it so much, why wouldn’t they?”

Since the Advance store was so packed at last year’s giveaway, Schwartz said they are looking for a new venue to host the event.

Both Dickess and Schwartz also said they hope the giveaways will continue to be an annual event.

“This is going to be ongoing,” Schwartz said. “It’s too good of a program not to.”

To donate or enter the drawing, visit either store located on Park Avenue.

A South Point woman who pretended to be a nurse so she could get prescription drugs pleaded guilty to a... read more