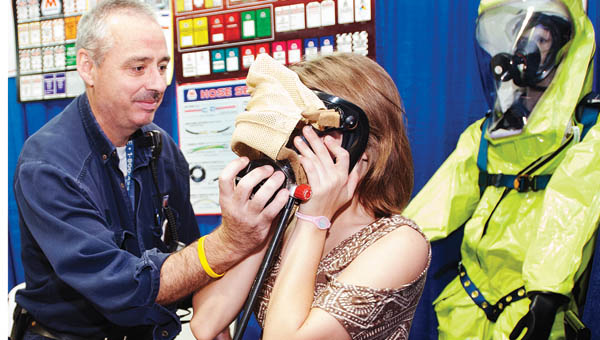 CATLETTSBURG, Ky. — Traveling from West Virginia into Kentucky on I-64, it is hard to miss the massive expanse that is the Marathon Petroleum refinery.

Covering more than 650 acres of land, running a company that size requires some serious manpower. For the last two weeks, students from all over the Tri-State were able to meet the folks that keep the wheels turning at the refinery and even get hands on with some demonstrations.

This year marked the sixth annual Career Day sponsored by the Catlettsburg Refinery Diversity Team. Offered at the training facility, area eighth graders were educated on all facets of refinery life, from security and fire and rescue, to accounting and the medical team.

Greg Jackson, human resources manager, said the main objective of the career fair is to get middle school students thinking ahead to high school and spark their interest early on in the fields of math and science.

DBMS student Jackilyn Smith said the fair gave her a new impression of the refinery. Smith said she enjoyed the security team’s booth, which demoed various cameras and monitor systems.

“I liked the security,” Jackilyn said. “I like how they put the cameras everywhere.”

Jackilyn also said she liked the product control booth, which showed, on a small scale, how products are transferred to different tanks.

Outside the training facility, a group of inquisitive girls climbed aboard one of the refinery’s fire engines, while a group of boys inside learned about the basics of accounting with a simulated lemonade stand.

Other booths included engineering, which designs and oversees construction projects and equipment upgrades at the refinery, and environmental safety, which develops programs and procedures to prevent occupational injuries or illness.

The fair continues through Tuesday. Jackson said it is likely the fair will be expanded to three weeks next year if student participation keeps increasing.

The Point expanding to be jobs leader