The Point expanding to be jobs leader 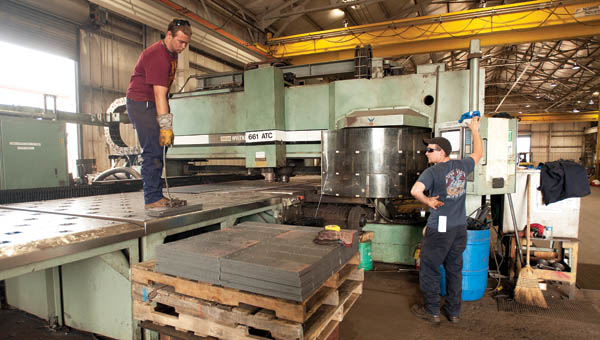 Seth Tucker, left, and Danny Hagley, right, work on a plasma and punch machine making railroad car parts during their shift at Engines Inc., located at The Point industrial park in South Point

SOUTH POINT — For years motorists traveling County Road 1 in South Point battled clouds of fog from early morning until noon while the rest of the Tri-State roads were bathed in sunlight.

Most there considered it the price they had to pay to keep one of the area’s largest employers, Allied Chemical, a company that spewed chlorides, nitrates, sulfates and even arsenic into the atmosphere as it went about its daily business of producing ammonia fertilizers and formaldehyde.

Allied was the first company in the country to come up with the process to develop ammonia, first opening a plant in Syracuse, N.Y. In 1945 Allied came to Lawrence County, taking over the former Buckeye Ordnance factory that had been set up on farmland in South Point right after Pearl Harbor to make munitions for the war effort.

For decades Allied provided a handsome living for workers in the Tri-State, reaching a peak employment figure of 1,350 in its heyday. By the time it shut down in the late 1970s that figure had dropped to 250.

Then it closed its doors for good.

In 1979 Ashland Oil bought the site to prove that bushels of corn teamed up with tons of coal could fuel a car via ethanol. However after about four years, Ashland gave up on that plan and an uncertain future lay ahead for the 504 acres of land.

The site lay abandoned until the Lawrence Economic Development Corp., bought it in 2001 with the intent of turning it into the premier industrial site in the Tri-State.

The reason was pure survival.

“Pat (Clonch, former LEDC chief), myself and other development leaders were trying to work with businesses,” Ralph Kline of the Ironton-Lawrence County Community Action Organization, said. “We knew if we were going to compete with other communities like Columbus, we would have to have sites and be able to react.”

Founded in 1983, the LEDC is a non-profit organization of economic development leaders focusing on business recruitment and job creation. Those leaders started eyeing the 500-plus acres Ashland, Inc. had given up on.

Kline called it a natural fit because the land was between the Ohio River and U.S. 52 and had another main highway artery and railroad spur line running through it. It was serendipitous that Ashland Inc. owned the land since that corporation, then headquartered here, was big on economic development and community support.

Need for a park

Leaders knew they needed a centralized industrial park to attract jobs after their experience with bringing Cabletron to Ironton.

“When we first worked to build that building for Cabletron, it was a very difficult venture,” Kline said. “We had to find the site, had construction costs, had to deal with water and storm sewer. It was very difficult, but we were able to accomplish it and that was a good lesson. We needed to be able to do that more efficiently and effectively.”

So the LEDC matched empowerment zone funds with other resources to purchase the Allied site for $3.86 million. Funds from the Economic Development Administration paid for the main road through the site and brought in electric, water and sewer. Plus, both former owners, Ashland and Allied, using federal cleanup money, remediated the brownfield.

Today there are eight companies in 11 buildings in the heart of The Point, a tract of meandering asphalt roads, pre-fab metal structures and dirty gray concrete holding tanks, remnants of the site’s past life as a munitions factory and nitrogen manufacturer.

On the fringes of the park, five companies — Pyro Chem, 7-Up, Quality Carriers, Mid-Valley Supply and Applied Technologies — had already set operations before the LEDC formally created The Point.

The first to move into the park was Calgon Carbon, a Pittsburgh-based supplier of activated carbon, utilizing a pre-existing building. Next came Engines Inc., a machining and fabricating operation, that took possession of the first structure built by LEDC at The Point, a 42,000 square foot structure in 2004. Two years later the firm expanded to two more buildings — one 17,500 square feet and the other 42,000 square feet.

What came next was recruiting new employers by following the philosophy “if we build it, they will come.”

And come they have.

Many of the new businesses have taken over steel buildings the LEDC constructed without any particular owner in mind.

Right now, the largest spot is held by Chatham Steel, a metal distribution company based in Savannah Ga., with a 56,000-square-foot building.

The fact that there was a building ready to move in at The Point was a major draw for Chatham Steel, according to Bert Tenenbaum, president.

“There was a building there that would allow us to start our business up faster than had we built on property in Ironton,” Tenenbaum said. “I am not going to rule out we won’t build in Ironton. The Point made it easier to start. We got our operation started a lot faster. The spec building met our needs, how the building was portioned. It enabled us to not only move into it but as we grow it is capable of handling that.”

A site with 500 acres sounds spacious and capable of offering largess of land. But economy is the watchword for those recruiting new employers and accommodating them once they get there.

“Every company would want massive acreage,” industrial park director Jeremy Clay said. “We have to be conservative with acreage.”

Today there is just under 40 percent of the acreage at The Point still available for development.

The variety of companies now and in the immediate future at The Point runs the gamut from light manufacturing to distribution to logistics. But all are recruited with a single guiding mindset

“It is that the leadership of Lawrence County becomes a partner with that company,” Dr. Bill Dingus, executive director of the LEDC, said. “We will meet with them to help understand their needs and develop an incentive package that will help meet those needs.

“Quite honestly, our incentives are always tied to jobs. If they are not creating jobs, we are not going to be able to provide incentives. We need jobs. This is not to make money. It is to create jobs.”

The companies that make up The Point employ approximately 350 people. When the two buildings currently under construction open for business that figure will jump to more than 500.

One of the new additions is Intermountain Electronics, a Utah-based electronics manufacturer and an unnamed international logistics company, sets up shop.

While secrecy shrouds the identity of the other firm, speculation has long been that the company is FedEx. Recently the LEDC sold 9 acres to Scannell Properties LLC of Indiana, which is the largest developer of FedEx properties.

As companies continue to be recruited to The Point, the industrial park is also redefining itself as riverfront acreage is turned into an intermodal transfer facility. When completed product can come into The Point and go back out via river, rail or road, opening southern Ohio to the rest of the country.

“That really crystallized with the development of the Heartland Corridor, a strategic corridor that just happens to run through The Point,” Dingus said.

The corridor is a partnership between Norfolk Southern Railway and the Federal Highway Administration whose goal is to improve freight operations between Norfolk, Va., and Chicago, Ill., and Columbus.

It’s a chance to get up close and personal with candidates running in the November election. The trustees of Quinn... read more