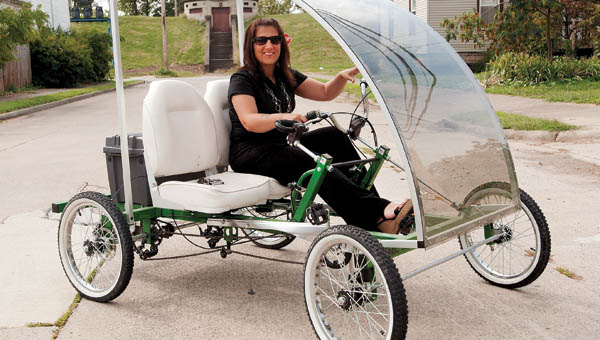 Traci Fisher demonstrates a Rhoades Car bicycle. Rhoades Car features four wheel bicycles where you can build your own bike.

For folks on the north end of Ironton, it is not unusual to see Richard Fisher or his daughter Traci pedaling their cars around the neighborhood in the evenings.

Not quite a car, but more than a bicycle, their Rhoades Cars have been turning heads across the Tri-State — at Ironton football games, at bike events in Huntington, and elsewhere — causing people to inquire about the unique conveyance.

Traci said her father had a natural interest in owning one of the four-wheeled bicycles, and after retirement, went a step farther and bought his own dealership, Ironton Rhoades Car.

“I’ve become an instant biker,” Traci said of her new love of the Rhoades Car.

Simply put, Rhoades Cars have four bicycle wheels and drive much the way a car does. Some have recumbent seating and some have standard bicycle seating. They are custom made to have one to four seats, a battery-operated motor and even canopies and rearview mirrors or turn signals.

Traci said she is helping her father run the business, going out for demos and talking with area companies about the economic and health benefits of the Rhoades Car.

“We are in the informative phase,” Traci said. “Letting people know what they are and what we have.”

Traci said the cars are perfect for inactive people looking to get out of the house, or people who have had surgeries. Motorized versions of the car take much of the physical strain off pedaling.

“It takes some of the workload off of you so you can go longer distances,” she said.

The cars are also an eco-friendly way get around, Traci said.

Next month, the Fishers will have their Rhoades Cars in a few events in the area. On Oct. 14, Traci will offer on test rides at Central Park in Ashland, Ky., and Oct. 30, She will be at the KYOVA Mall for safe trick-or-treat to pass out candy and give rides.

Rhoades Cars are made in the U.S. and shipped fully assembled, Traci said, and interested people can go to www.RhoadesCar.com to customize their car or find out more information. People can also contact Traci at (740) 237-9995 to learn more or to test drive one of the models.

(MCT) — Next year’s state report cards will feature a new measure for Ohio schools: How their students are doing... read more