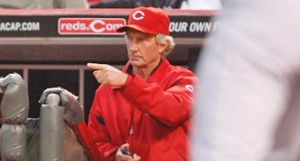 Cincinnati bench coach Chris Speier is 7-2 while filling in for ailing manager Dusty Baker. (Courtesy of the Cincinnati Reds)

CINCINNATI (AP) — While they’re still trying to finish with the NL’s best record, the Cincinnati Reds are also focused on trying to get their players some rest before the postseason.

Their next opponent can’t afford to take a break.

The Milwaukee Brewers will try to bolster their faint postseason hopes by ending their recent struggles in Cincinnati during a three-game series that begins Tuesday night.

The Reds (92-61) wrapped up their second division title in three years Saturday and trail Washington by one game in the NL. The team that finishes with the best record gets to face one of the two wild-card teams in the opening series of the postseason instead of a division champ.

Instead of pressing its players, Cincinnati used Sunday’s game against Los Angeles, a 5-3 loss, to give a break to Jay Bruce, Ryan Ludwick and closer Aroldis Chapman among others.

“We’re going to take care of ourselves and make sure the people that need a day or two to get their injuries under wraps will have those,” bench coach Chris Speier said.

Speier has managed the Reds since Dusty Baker was admitted to a Chicago hospital for an irregular heartbeat Wednesday. He visited the team after being released Sunday and might return to the dugout as early as Tuesday.

“Hopefully with the day off (Monday) and him getting a good, relaxing night at home, he can come back on Tuesday and see how he feels,” Speier told the team’s official website.

If Baker is back, he’ll manage against a Milwaukee team that faces a sizable deficit in the NL wild card with nine games left. The Brewers (79-74) have climbed into contention by going 25-8 in their last 33 games and 13-6 in their last 19 on the road, but they were routed 12-2 in Washington on Monday.

Milwaukee swept three games against visiting Cincinnati from Aug. 6-8 but is 1-5 at Great American Ball Park this season.

Mike Fiers (9-8, 3.38 ERA) will try to help the Brewers earn a win there while shaking off another difficult outing. The right-hander threw 81 pitches over just three innings in a 9-7 win in Pittsburgh on Thursday.

The rookie is 3-4 with a 6.75 ERA over his last eight starts after producing a 6-4 record and 1.82 ERA in his first 12. Fiers has thrown a career-high 172 1-3 innings with Milwaukee and Triple-A Nashville but insists he isn’t fatigued.

“I still feel strong,” Fiers told the team’s official website. “I’m just not hitting my spots. I’m not getting it done. I have pitched the most innings I have ever pitched, but I’m not going to use that as an excuse. It’s just bad pitching on my part.”

Fiers, 1-1 with a 1.29 ERA in two starts against the Reds, will pitch opposite Johnny Cueto (18-9, 2.84), who is seeking to add to his NL Cy Young Award hopes with another strong outing. Cueto posted six scoreless innings in a 5-3 win over Chicago on Thursday after going 0-3 with an 8.22 ERA in his first three starts this month.

The right-hander is 1-1 with a 1.71 ERA and 23 strikeouts in 21 innings spanning three matchups with Milwaukee this season. He’s allowed one run in each of his last three home starts against the Brewers, including a 2-1 victory July 22.