County heroes to be honored at memorial 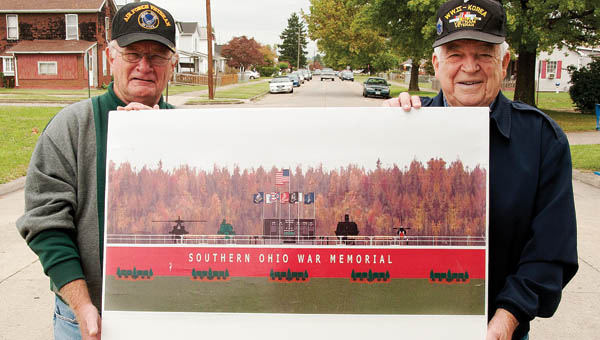 LUCASVILLE — Names of Lawrence Countians who made the ultimate sacrifice for their country are sought as the Southern Ohio War Memorial Foundation organizes an eight-county war memorial to honor the contributions of the country’s war dead.

“This is to honor those who have given their lives for all,” Mike Chaffin, of the memorial foundation, said. “This is to show our respect.”

Chaffin and Gene Elliott, committee chairman of the foundation, came to the Tuesday work session of the Lawrence County Commission to explain the project and solicit support. The pair is meeting with commissioners from all eight counties, plus other potential supporters.

“We have all 27 American Legion posts on board,” Elliott told the commissioners.

The foundation started about 18 months ago when Scioto County Commissioners leased about four acres to the foundation for the memorial on U.S. 23, two miles north of Lucasville.

The plan is to have a wall memorial listing the names of those who died in wars from World War I to Afghanistan who came from eight counties in southeastern Ohio — Adams, Fayette, Highland, Lawrence, Jackson, Pike, Ross and Scioto.

“We have had different events on our own to raise money,” Elliott said.

Right now the foundation is seeking a 501c3 tax classification to enable it to apply for grants and allow contributions to be tax deductible for donors.

“I think this is going to be a great thing,” Commission President Les Boggs said. “I don’t see why we wouldn’t want to support this both with our words and financially.”