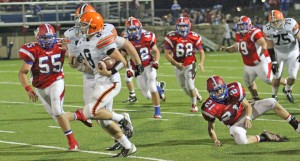 Ironton defended the spread offense last week in a 61-34 win over Portsmouth as the Trojans threw 27 times.

This week the Fighting Tigers travel to Johnson Central (Ky.) to face an Eagles’ offense that runs the wishbone.

“It’ll be quite an adjustment for us defensively in a lot of ways,” said Ironton coach Mark Vass.

“For one thing, most teams like to spread the field and throw the ball. It’s unusual to face a team that wants to run the ball. And when they run the ball, they can mix it up between power and the option. You don’t see much of that any more.”

The game will mark the first meeting between Ironton (5-0) and Johnson Central (4-1), one of the top teams in their region each year.

“They’ve got a good program. We knew it would be a tough game. They’ve had some good games through the years with Ashland and we know what kind of program Ashland has,” said Vass.

The Eagles rushed for 416 yards in last week’s 37-6 rout of Boyd County with running back Daymion Belcher carrying 17 times for 148 yards and three touchdowns.

Josh Dillon had 133 yards on a touchdown and Jordan Young added 72 yards on seven carries and scored a TD.

One of Johnson Central’s wins includes a 46-12 whipping of Logan, ranked 10th at the time in the West Virginia Class AAA poll.

The Eagles are a young and talented team.

Although the skilled players are small, fast and quick, the interior linemen boast plenty of size.

“They get those big linemen on you and then their backs get in the hole quickly and make it hard to get a hand on them. They like to pound the ball at you,” said Vass.

There is more size on the defensive side of the ball as well.

The secondary has Young and Josh Gound (5-7, 150) at the corners and Adkins the safety.

“They are very aggressive defensively. Their linebackers are very active and the defense as a whole will swarm to the ball,” said Vass.

NOTE: Fans traveling to Johnson Central should take Route 23 South to Paintsville. The school is located on the left side of the road just as you reach Paintsville at 253 N. Mayo Trail. The trip is approximately 63 miles.

Jim Walker jim.walker@irontontribune.com   Not much has change since the last time. The Ironton Fighting Tigers and Symmes Valley Vikings... read more