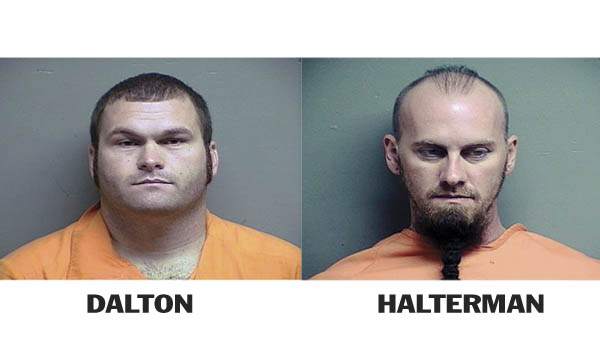 Two employees at the Ironton Post Office are off the job after being arrested on charges stemming from two separate incidents.

Two employees at the Ironton Post Office are off the job after being arrested on charges stemming from two separate incidents.

According to Special Agent Scott Balfour, public information officer for the U.S. Postal Service Office of Inspector General, temporary letter carrier Forest Halterman, 39, of 2528 S. 12th St. in Ironton, has been charged with one felony count of theft and one misdemeanor count of theft.

Halterman turned himself in to authorities on Sept. 20. Halterman appeared in Ironton Municipal Court last week and pled not guilty.

Halterman is off the job at the Ironton Post Office pending the outcome of the criminal and administrative processes.

In a separate matter, Herbert M. Dalton II, 34, of 2316 Meadow Ridge Court, Wheelersburg, who worked at the post office customer desk, was arrested Wednesday and charged with two felony counts of tampering with records and one misdemeanor count of theft.

The tampering with records charges allege Dalton falsified sales transactions in the point of sale system, and the misdemeanor theft charge alleges Dalton deprived the Postal Service of $788.94.

Dalton hasn’t appeared in court yet.

Dalton is suspended from the Ironton Post Office pending the outcome of the criminal and administrative processes.

Balfour said both investigations were conducted by special sgents with the U.S. Postal Service Office of Inspector General in Columbus.

USPS OIG Special Agent in Charge Robert Lapina said in a prepared statement, “The vast majority of the postal service’s 500,000 employees are hard working, honest individuals who work diligently to move the mail to its proper destination.

“Unfortunately, there are a small number of individuals who betray the public’s trust. Investigating and identifying those employees who steal mail and money is a priority of special agents of the U.S. Postal Service Office of Inspector General.”

USPS OIG special agents are continuing other investigations of missing money from the Ironton Post Office. If individuals have information regarding missing postal funds from the Ironton Post Office, they are urged to contact the USPS OIG toll free hotline at 1-888-USPS-OIG or www.uspsoig.gov. Individuals providing significant information may be eligible for a reward.

The special agents were assisted by the Ironton Police Department and Scioto County Sheriff’s Department. The cases are being prosecuted by the office of Lawrence County Prosecutor J.B. Collier, Jr.