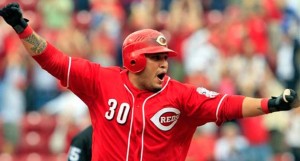 Cincinnati catcher Dioner Navarro celebrates after his game-winning triple gave the Reds a 2-1 win over the Milwaukee Brewers Thursday in the final regular season home game. (Photo Courtesy of the Cincinnati Reds.com)

CINCINNATI — Todd Frazier finally did what he hasn’t been doing, and Dioner Navarro did what he was worried about not doing.

Frazier hit a game-tying home run with two outs in the ninth inning and Navarro tripled home Jay Bruce who had singled as the Cincinnati Reds rallied to beat the Milwaukee Brewers 2-1 Thursday in the final regular season home game.

After Zack Cozart and Joey Votto struck out, Frazier hit the first pitch from Brewers’ closer John Axford 422-feet straight away over the fence in centerfield. It was his first home run since Aug. 21.

“I’d be lying if I said I wasn’t thinking about it. I’ve been frustrated the last four or five games,” Frazier said of his home run drought. “I finally got it straightened. I want to hit a home run every pitch I hit.”

While Frazier was being aggressive, Navarro was being cautious. After hitting two long foul balls, Navarro connected on a 3-2 pitch with a drive to right-center that scored Jay Bruce who had singled to left field following Frazier’s home run.

“I was just trying to put the ball in play. I just didn’t want to strike out,” said Navarro.

The loss was critical to the Brewers’ postseason hopes. They fell four games back of St. Louis for the final National League wild card with six games left.

Axford had been successful in his last 15 chances, but he couldn’t finish the job as he allowed both runs in the ninth.

“It’s a crushing loss. It hurts. It put us all in a tough spot,” said Axford. “Obviously, we’ll have to win every game and hope for some help on the other side.”

Reds’ starter Mat Latos pitched seven strong innings — he now has 204.1 innings pitched on the season — allowing one earned run and three hits. He struck out three and walked one.

The only run was a solo home run by Carlos Gomez leading off the third inning, his 17th of the season.

Jonathan Broxton (3-1) pitched the ninth inning to get the win. He gave up two bloop singles to start the inning, then got a force out at second base followed by a strikeout and an easy fly ball to left field to end the inning.

“I was really, really proud of Mat Latos,” said Reds’ coach Chris Speier who is running the team in the absence of manager Dusty Baker. “(Latos) didn’t have his good stuff so he pitched today.”

Baker was at the stadium before the game but left before it started. Baker is still recovering from an irregular heartbeat and a mini-stroke.

Doctors told Baker he could resume his duties next Monday in St. Louis in the final regular season series.

Frazier’s home run snapped a 16-inning scoreless streak by the Reds who have been struggling with their offense.

“Everyone is wondering about the offense and it’s a concern. If we were in St. Louis (for the final series before the playoffs) right now we’d be wondering if we could score. I’m not concerned at all,” said Speier. “Good pitching is going to get people out.”

NOTES: The Reds had a 50-31 home record, the most wins in the 10-year history of Great American Ball Park. … Gomez’s homer was only the second allowed by Latos in his last six starts, four of them at homer-friendly GABP. … The win gave the Reds a 9-6 win in the season series with the Brewers. … Reds’ leftfielder Ryan Ludwick was out of the lineup for the seventh straight game with a sore groin. … Attendance was 23,411 for the final home game to give the Reds 2,347,251 at home this season, the second-highest attendance in the ballpark’s 10 seasons.

COLUMBUS (AP) — Urban Meyer isn’t handing out a lot of redshirts at No. 14 Ohio State. Instead, he’s throwing... read more