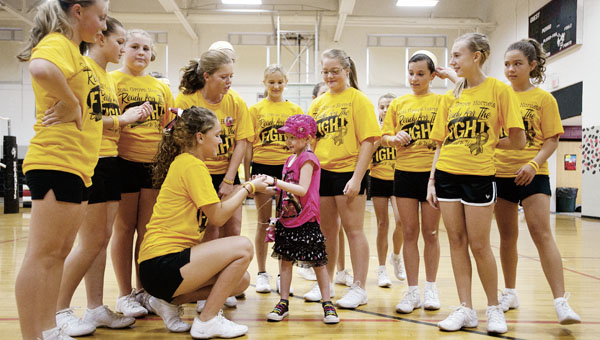 COAL GROVE — The students were cheering for more than victory over their football opponents Thursday at the Dawson-Bryant Middle School pep rally.

They were also cheering for victory over childhood cancer.

September is Childhood Cancer Awareness Month and students were decked out in gold to show their support.

Last fall, the school had a “Pink-Out” for breast cancer awareness. At about the same time, student Katelyn Ferguson was dealing with her then 5-year-old cousin’s own battle with cancer — leukemia.

“I spent three days at the children’s hospital in Columbus in the oncology ward,” Katelyn told her classmates at the pep rally. She said spending that time with her cousin, Beth Brown, and the other children on the ward, was life changing.

At the rally, Katelyn reminded the students that cancer affects everyone.

“It’s not just in the St. Jude’s commercials,” she said. “It happens in real life.”

Because of her family connection in dealing with cancer, Katelyn approached her student council advisers, Kara Moore and Aaron Hankins, as well as her cheerleading adviser, Amy Lucas, about getting the word about childhood cancer and raising some money for the cause.

“Absolutely. Whatever we can do,” Moore said. “… This really affects a lot of our students.”

Director of Golden Kidz, Alicia Dennison, also attended the pep rally and spoke to the students. She said the organization was started to help children in the local community and their families and to raise awareness about childhood cancer.

“Our babies deserve it,” Dennison said. “And people to be their voice when they can’t.”

Now 6 years old, Beth was also at the pep rally. She even did a few cheers with the cheerleaders. After the rally was over, she received a barrage of high-fives from the football team, cheerleaders and other students.

“The kids have taken the bulls by the horn,” principal Rick Barrett said. “I’m very proud of our kids and out student council.”

The middle school students were also asked to bring in coloring books and crayons to donate for children with cancer. The class that brings in the most will win a pizza party.

County to fight ODOT over proposal   A week after an Ohio Department of Transportation representative said the prospect of... read more