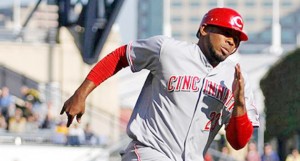 Cincinnati’s Denis Phipps scores the winning run in the ninth inning as the Reds rallied to beat Pittsburgh 4-3 on Sunday. (Courtesy of The Cincinnati Reds.com)

PITTSBURGH (AP) — What started as a season of promise for the Pittsburgh Pirates is nearing a familiar end.

The Pirates ensured they would finish with a record 20th straight losing season Sunday when they blew a ninth-inning lead in a 4-3 defeat to the Cincinnati Reds.

Pinch-hitter Xavier Paul led off the ninth with a home run off Joel Hanrahan (5-2) and Zack Cozart had a go-head double for Cincinnati, who clinched home-field advantage in the NL division series. The Reds moved into a tie with Washington, who lost to St. Louis, for the best record in the league at 96-63

The Pirates extended their major North American professional sports record for losing seasons. Pittsburgh was 16 games over .500 on Aug. 6, but has lost 18 of 23 to fall to 77-82.

“I’m disappointed,” second-year manager Clint Hurdle said. “One of my goals when I got here was to re-bond this city with this baseball team and to be a group of men who do that collectively. So it’s definitely disappointing — especially when we were able to get to a certain point of the year where we were talking playoffs … and ultimately it all got away from us.”

The Pirates haven’t had a winning season since topping the NL East in 1992. Only twice in the 19 seasons in between have they won more than 77 games, and Pittsburgh has three games left to match or surpass the 79 wins the 1997 team had.

But in none of the previous years since 1992 had the Pirates been so far over .500 or holding a playoff spot for so long. Pittsburgh was in first place from July 3-14 and July 18 but fell to 19 games behind Cincinnati with Sunday’s defeat.

“It’s unfortunate, where we were halfway through the season and how good we were playing and where we were headed, to have it kind of fall apart,” Jones said. “Nobody saw it coming.”

Kind of like the events of the ninth inning, one in which two former Pirates played prominent roles.

Paul and Ryan Ludwick were on a last season’s Pittsburgh team that was in first place on July 25 but finished the season on a 19-43 slide.

Paul entered the game with four career home runs over parts of four seasons, and Ludwick had only one at-bat in the previous 10 days because of left groin soreness. He was scratched from the lineup due to wet field conditions on a day in which it rained throughout the first four innings.

Pittsburgh still had its chance. Aroldis Chapman walked Jose Tabata to lead off the bottom of the ninth, but Tabata was thrown out at third trying to advance after Chapman’s throwing error on a pickoff attempt.

Chapman then walked Clint Barmes and allowed a single to Rod Barajas before striking out Michael McKenry and Starling Marte to end the game and earn his 37th save.

Joey Votto went 2 for 4 with an RBI double for the Reds, who have won four of six.

“It was a big win for us because we want to get home-field advantage,” Cozart said. “It seems like we kind of lull through games a lot then turn it on at the end. That’s how it was today.”

Reds bench coach and interim manager Chris Speier said that Dusty Baker would join the team later Sunday in St. Louis and resume his managerial duties Monday in the series against the Cardinals. Baker has missed 11 games after having a mini-stroke.

Johnny Cueto pitched effectively but failed in his attempt to become the Reds’ first 20-game winner in 24 years. Cueto allowed three runs — one earned — on six hits in seven innings.

The most recent Reds 20-game winner is Danny Jackson in 1988.

Wandy Rodriguez allowed two runs in six innings for the Pirates, who beat the Reds on Saturday but could not win consecutive games for the first time since Sept. 4-5.

Rodriguez finished his season 5-4 with a 3.72 ERA in 13 games (12 starts) with Pittsburgh since being acquired in a July 24 trade with Houston.

That also was the previous time the Pirates won a series, but things were looking good for fans at PNC Park on Fan Appreciation Day with Hanrahan taking the mound having converted his previous 16 save opportunities. Hanrahan had allowed four earned runs in 33 prior appearances at home this season.

“I’m not a home run hitter to begin with and I certainly wasn’t expecting to hit a home run off a guy like Joel Hanrahan,” Paul said. “I was just trying to get on base and he happened to throw me a fastball up in the zone.”

The Reds scored twice in the second inning on Votto’s ground-rule double and Todd Frazier’s groundout. Jones’ 26th home run, a two-run shot in the bottom half, tied it.

NOTES: Four minutes into the game, umpires stopped play for a 4-minute rain delay. … Reds 2B Brandon Phillips was removed from the game in the sixth with tightness in his left leg that first flared up while running the bases in the third. SS Cozart replaced him in the lineup, with Valdez moving to second base. After the game, Phillips declared he would be fine. …The Pirates recognized the 40-year anniversary of Roberto Clemente’s 3,000th hit during a pregame ceremony. … The Reds and second-place St. Louis have split 12 games so far this season with St. Louis winning two of three played at Busch Stadium. … Pittsburgh closes its season with three games against the Atlanta Braves, a team it has not played since April.