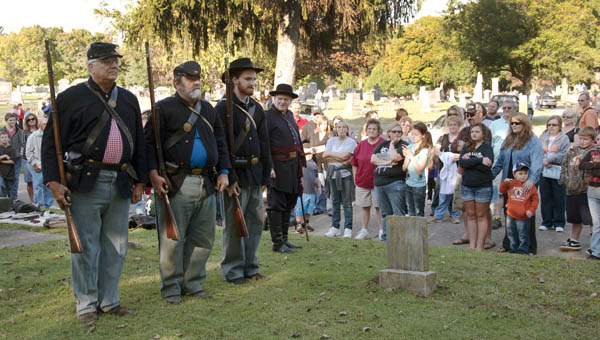 Ironton’s City of the Dead came to life once more at the annual Historical Walk at Woodland Cemetery, sponsored by the Lawrence County Historical Society.

Members of the historical society and history buffs from the community dressed in period costumes to detail the bravery, ingenuity and contributions those now buried in the cemetery brought to Lawrence County in their day.

There was Nannie Kelley Wright, portrayed by Kay Rader, inviting crowds to her mausoleum to tell how she became the second richest woman in the world.

“Queen Victoria was richer than me, but I was up there,” Wright said. “I was presented at the Court of St. James because of my wealth.”

The shrewd businesswoman didn’t know where her money would come from but was certain wealth would be hers. When the Spanish-American War broke out, Kelley had an avenue to sell her stockpiled processed iron.

“I became a millionaire overnight,” Wright said. “It was wonderful.”

Down the path from the Kelley mausoleum was the story of more frugal, but equally important contributors to the county’s growth, Charles Kingsbury and his devoted wife, Harriet. Kingsbury became the first superintendent of Ironton schools and was so esteemed by the community that pupils and friends erected the monument that now stands at his gravesite in Woodland.

Carol Pennington brought to life the story of Elizabeth Campbell Means, the second daughter of Ironton founder John Campbell, who married William Means, a Cincinnati banker and mayor. Their daughter, portrayed by Rosemary McCarty, married William Julian, who served as the U.S. Treasurer. On his death in 1949, Julian’s body was brought back to Woodland to rest next to his wife and her family.

Only during the Historical Walk is the granite and marble Woodland Abbey open to the public. Built in 1930, its crypts once cost $350 to $450, an exorbitant price during the height of the Depression. With floors of pink marble, gas-fired fireplaces and a marble lectern, it was built after Woodland reached what city officials thought was its capacity of 8,000 graves.

Among those taking in the evening walk through history was Cub Scout Pack 103. This was the second time for one of the pack’s leaders to take the historical walk.

“I love history,” Eric Davis said. “When we were here the first time, we knew we would be coming back.”