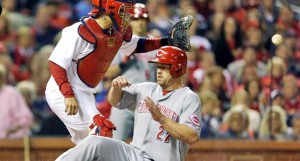 Cincinnati third baseman Scott Rolen slides safety into home plate as he scores on a sacrifice fly during Monday’s game. The Reds lost to the St. Louis Cardinals 4-2. (Photo Courtesy of The Cincinnati Reds.com)

ST. LOUIS (AP) — Jaime Garcia is in fine form for the postseason, winning his last three starts and homering off Bronson Arroyo, too.

The St. Louis Cardinals are almost there, clinching a tie for the second NL wild card and spoiling Dusty Baker’s return from a mini-stroke with a 4-2 victory over the Cincinnati Reds on Monday night.

After winning for the 11th time in 14 games, the defending World Series champions stayed at Busch Stadium more than two hours after the final pitch to watch the Dodgers snap a ninth-inning tie and beat the Giants 3-2 to avoid elimination. The plan for a late-night delayed victory party had been somewhat muted, with five cases of champagne on ice instead of the usual overkill of 20 cases of champagne and 20 cases of beer.

A loss by the Dodgers or another Cardinals win would wrap up a playoff spot for St. Louis and a visit to Atlanta for the wild-card game Friday. Both teams have two games to go.

“It’s different with this one-game playoff looming over our heads if we get there,” second baseman Daniel Descalso said. “I wouldn’t expect a raucous celebration but, you know, some celebration is in order if we do clinch it.”

“One step closer,” Matheny said. “Too early to start going there.”

Arroyo (12-10) threw 73 pitches while allowing three runs over five innings in a tuneup for the postseason after learning beforehand from Baker that he wouldn’t go deep into the game. Arroyo topped 200 innings for the seventh time but is 0-3 in his last four starts.

The Reds are 96-64, tied with the Nationals for the best record in the National League with two games to go, and must finish ahead of Washington to get home-field advantage throughout the postseason after losing the season series.

More important at this point is getting to the postseason fresh. Baker made it a point to get work for relievers Alfredo Simon and J.J. Hoover, both of whom hadn’t pitched lately.

“It was a matter of trying to win the game, but trying to get your guys fresh at the same time,” Baker said. “Right now, we’re about preservation and conservation.”

Baker missed 11 games, including the NL Central clincher and Homer Bailey’s no-hitter, while recovering from a stroke in a Chicago hospital that he had while being treated for an irregular heartbeat. He appeared noticeably fatigued after the game and spoke briefly.

Garcia (7-7) made it 5 for 5 at the plate against Arroyo when he led off the third with a drive that just cleared the right-field wall for his second career homer, although the perfect run ended when he flied out to end the fourth.

“I knew. I’m not going to lie to you. I faced him the last couple years and I knew I was 4 for 4,” Garcia said. “He’s a really good pitcher and he made a mistake and I put a good swing on the ball.”

Allen Craig and Yadier Molina added an RBI apiece in a three-run third, and Descalso had an RBI triple in the sixth that made it 4-1. Jason Motte worked a perfect ninth with two strikeouts for his 41st save in 48 chances.

Garcia gave up six hits, including three singles in a span of four at-bats in the third, with Brandon Phillips getting an RBI. Scott Rolen doubled, advanced on a passed ball and scored on Ryan Hanigan’s sacrifice fly in the seventh.

NOTES: Arroyo has allowed 26 homers, tied for third-most in the NL with Bailey and fellow Reds pitcher Mike Leake. … Ryan Ludwick returned to the Cincinnati lineup after missing eight games with left groin tightness but was removed in a double switch in the sixth. … Reds pitchers combined for seven strikeouts to set a franchise record with 1,231, breaking the mark of 1,227 in 2008. … Motte has all of the Cardinals’ saves. The franchise has never gone a season with just one pitcher getting all of the saves.

Pelini showing no emotion on return visit to Ohio State